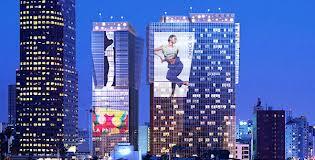 For centuries, billboard ads have been an ambiguous but undoubtedly treasured way to convert eyeballs into customers. In the land of “out of home” advertising, there’s no doubt that the market finds value in these giant eye sores — at the very least for brand awareness.

For centuries, billboard ads have been an ambiguous but undoubtedly treasured way to convert eyeballs into customers. In the land of “out of home” advertising, there’s no doubt that the market finds value in these giant eye sores — at the very least for brand awareness. But the sketchiness surrounding billboard effectiveness, and the elusive, at best, ways in which companies measure billboard success simply cannot compete with today’s real-time, hard data results of online advertising.

The Traffic Audit Bureau (TAB) Out of Home Ratings has long been the currency in billboard audience measurement (think Nielsen, but for benches and billboards), and involves a combination of panels, surveys, census studies and eye-tracking to measure market sentiment. Turns out, though, that small survey sizes, subjective panels and an outdated understanding of how people read billboards makes the Out of Home Ratings success metrics educated guesses, at best.

This isn’t simply a growing preference for online advertising, where ad spend has increased 17% since 2012, pulling in more money than the ad spend behemoth that is broadcast for the first time in Internet history. Take CBS Outdoor’s Oakland Raiders case study, for example. The goal was simple: place billboards throughout San Francisco in an attempt to bolster season ticket sales.

The Raiders wanted to target males between the age of 35 and 49, ideally with a household income of $75K or more. According to TAB ratings, the billboards successfully reached 42% of more than 517K males living in the area. Increased purchases, on-site traffic nor actual event attendance went into the success metrics of the billboards. Instead, impressions and awareness count most in this arena — making actual conversion an estimated number.

And in today’s advertising landscape, estimated data doesn’t fly. Data-driven business decisions are becoming the way of the world — and no longer just in theory. The days of educated guessing on how well a traditional ad converted potential customers are coming to a serious end — thanks to intelligent ads that rely on hard numbers.

Imagine a billboard that captures actual engagements, and reports back the interests, brand affinities, demographics, purchasing behaviors and other identity attributes of every passerby who interacted with the ad. An advertiser like the Raiders could take these data points and connect the dots between customer purchase habits, realizing maybe it isn’t the 35-49 year old, male demographic purchasing their season tickets — but successful 25-34 year old women. How would that change their advertising strategy? Almost entirely.

And, with Google Glass and other wearable tech, and with the industry moving toward data-driven placement, it’s likely we aren’t far off from this reality. Further, the value of identity data information is already being tested on the web, used by companies like Vox, the Washington Redskins, SXSW and more.

Digital innovations in advertising have come quite a long way. Today, data scientists can teach an ad to read rich, unstructured audience data of users who interact with it. Then those same data scientists can build platforms that segment the data, and allow for actionable insights that affect the bottom line in an easy-to-see, not-guessing-in-the-slightest way.

And it is that not guessing aspect that has such appeal, and provides such high ROIs.

Truth is, advertising is often about casting a wide net and seeing what you catch. With intelligent ads, though, you get a clear picture of exactly what falls into your net — giving you the capabilities to bait more of what you like (trout, salmon, people who convert — you get the picture). In essence, the digital ecosystem created through intelligent ads provides us with unmatched opportunities for making data-based decisions to optimize your bait.

The key here is knowing exactly who your audience is, by the actual numbers rather than by the surveys or panels. Intelligent digital ads deliver high-impact data points, and until billboards catch up to the data-driven economy we’re heading toward, their “guessing as proof” metrics will continue to be exactly what they always have been — ambiguous and nostalgic.