General Motors is a new company. That’s right—the old, hulking (and recently bankrupt) giant of American industry has the DNA of a startup. That fact wasn’t clear to me until recently, when I sat down with Plant Manager Bill Tiger and Lead Human Resource/Labor Relations Manager John Raut at GM Baltimore Operations, located in White Marsh, MD.

“We’re all driven by the goal that our kids and grandkids need manufacturing jobs,” Tiger told me just off of the factory floor.

General Motors is a new company. That’s right—the old, hulking (and recently bankrupt) giant of American industry has the DNA of a startup. That fact wasn’t clear to me until recently, when I sat down with Plant Manager Bill Tiger and Lead Human Resource/Labor Relations Manager John Raut at GM Baltimore Operations, located in White Marsh, MD.

“We’re all driven by the goal that our kids and grandkids need manufacturing jobs,” Tiger told me just off of the factory floor. Seeing the way US automakers—especially GM—were doing business a decade ago gave Bill that uncomfortable feeling of a situation getting out of hand. Bill is a big guy, and he wasn’t about to give up such an important fight. But to reassert the productivity of the American autoworker, he didn’t crack the whip—he asked for cooperation. 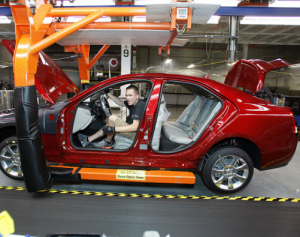 “Somebody’s gotta make something,” he continues. “And if you’re gonna make something and make money doing it, we need to figure out how to do that together.” Sitting next to the head manager of this powertrain assembly facility just off of I-95, John Raut nods his head in agreement.

“Everybody knows we went bankrupt doing things the old way,” admits Tiger, a Michigan native. “There were a lot of things we were doing right but not fast enough.”

Since GM emerged from bankruptcy, the focus on collaboration and multi-level innovation is much more pronounced than it was before the financial crisis and recession.

Still, the realization that management and workers will succeed or fail together isn’t enough.

“It’s one thing to say we need to work together, hold hands and sing ‘Kumbayah,’” Tiger jokes. “That’s all very nice, but it really doesn’t get you where you need to be on working together.”

GM managers have metrics for quality, cost, and safety—all the key things—and those are part of broader data GM processes from all over North America. The metrics feed up to Detroit, but they also need to go down to the factory floor: It’s about team leaders and all of their team members knowing what’s going on and where improvements can be made.

Feed Your Workers Information, Not Data

Of course, there are ways to botch this democratization of data. Bill laments the time he visited one plant and for one sole operation he saw 50 pages of reports with 15-20 dimensions on each page. Some parameters were up to spec and some weren’t, and it was up to the machine operator to fix what fell out of the acceptable performance range.

As Bill points out, if you go through 50 pages that look the same, you’re going to miss something sooner or later.

“Why are we putting the operator through that?” he wondered. “The computer knew which one was bad, so why don’t you just say, ‘Hey everything was good, or a couple [of measurements] were bad, and here’s where they are.” Computer analysis needed to take data a step further to eliminate visual report overload on the plant floor.

“So now instead of the exercise being an Easter egg hunt to find which one’s out, you just tell them either ‘Good, keep going,’ or ‘You’ve got a problem,’ or, ‘Hey, you’re starting to trend out.’”

There are naysayers who call this “dumbing down” what operators do. But if there’s no immediate troubleshooting for the operator to do, you can free up major brain space for analysis and solving the next issue.

When people understand metrics for their impact, data become much more useful. Design engineers used to preach about what the machines should do, but now operators examine what they really do. The old repetitive-task assembly line has shifted to embrace nimble minds.

So how do you retool the human part of the human-machine interface?

One thing Bill says he hears a lot is, “I can’t get workers who can do that or have the needed education level.” What he’s found is that readiness to learn and work in teams is more important than a particular piece of paper. “I don’t care how bright they are, if they aren’t willing to learn or work in a team they’ll be stuck.”

It takes time to learn modern manufacturing technology, but then the workers will advance it further than what the engineers who designed it could even imagine it doing.

“The day the engineers hand you the key to that system should be the worst it ever runs,” Tiger asserts, “because from that day forward you should be making improvements on quality, on throughput, on anything about it.”

“They don’t have to be giant home runs,” he emphasizes. “Little ones over time just stack up and lead to huge improvement.”

Many of those improvements originate in a discovery process that may seem counter-intuitive: forcing errors.

Not a lot of managers make it a point to challenge workers to screw up their product. But Bill and John needed to find a way to force innovation. They did it by drawing out “impossible” production errors.

“We would find how we could make a defect,” Tiger says. Sometimes it was making a defect once or twice a year that they couldn’t afford, because even that frequency in a manufacturing process is pernicious.

“What do we have to do so we don’t make that defect?” they asked, “Not so that we don’t do it, but so that it can’t happen?”

In another testament to their ingenuity, floor operators knew how to replicate or even originate errors that design engineers insisted could never happen. Twist a few knobs or pull a few levers and you’ve got a costly error that might come up once in a blue moon, but will likely come back as embarrassing and costly rework for the plant.

Before, things were set up for reaction. If an error got out the door, they would have a conference about it, then hunt down the recent error and fix just that trouble spot. Hunting for all possible errors is a different approach. “Let’s stop stopping at the first thing that we find and run it all the way through,” Tiger and Raut told their teams. “Get creative! How are we going to mess this up, and now how do we fix that?”

Is what they find the same as what created the defect that got to the dealership? Maybe, or maybe not, but it’s a snake in the grass that will bite eventually. “We need to know that that error is never going to happen again so we can move on to something else,” Tiger says.

John Raut adds in the critical ingredient of communication. “Share it with the rest of the organization to see, ‘Hey, could this happen elsewhere in the plant?’” Sometimes a gear issue is more than a gear issue—it could have been a part location issue and just happened to be in gears that time. Following problems past their most recent occurrence is what will allow GM to stay ahead of the game.

An Engine for Lasting Innovation

So where did this whole rethinking of what manufacturing means come from? The bankruptcy?

“It had been underway for a while,” Tiger says. “This building here was one of the pioneers for flipping that switch. We knew we weren’t getting the same results as some of our competitors, but old habits are hard to break.” From a benchmarking standpoint, especially against Japanese automakers, they knew changes needed to be made.

When GM Baltimore Operations opened up, Bill says that a very progressive union and plant leadership wanted to show what American manufacturing could really do. They got everyone into common uniforms and instituted team-based leadership.

It’s about pursuing quality with information that comes from the machines and their operators alike—both can point you to insights, but you have to follow through for impact.

The shared goal of quality improvement underpins everything that’s going right. With quality in mind, revelations of where to find cost savings, time efficiency, and even novel defects became apparent.

As tour groups file through GMBO to see this new GM in action, other successes are coming too. The biggest one lately is the repatriation of an electric motor line from Mexico—it’s new stuff to learn and a new set of future puzzles, but it’s a reward for a job well done.

Bill Tiger says that sometimes the leadership team gets that feeling of, “Oh my God, why didn’t we do this years ago?”

“Well,” he says, “You can’t regret it for long, because ten years from now it’ll be different again.”