The Profound Impact Of Data Logging On International Logistics

In my last post, Where Do You Draw the Line Between Relevancy and Privacy, I talked about some of the plusses and minuses of behavioral online advertising as it pertains to personal (big data) privacy. Finding the balance between honoring people’s privacy while providing them with an interesting and relevant online experience is tricky, complicated, and an issue of context. What I may consider as a violation of my privacy, you may think nothing of—or what you may consider an invasion of your privacy, I may say, “Wow. That’s cool. And maybe a little creepy.”

And about those targeted online ads. We know marketers are working hard with advertising platforms, such as Google and Facebook, to make sure we’re seeing the “right” ad at the “right” time. Do they always get it right, though? Here’s an entertaining story about a colleague’s run-in with one of Facebook’s ads. You be the judge of who got it right. 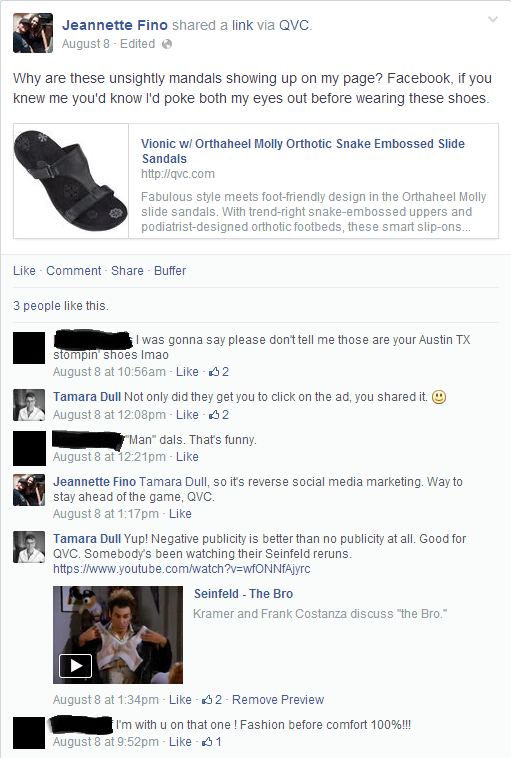 What we know about Jeannette. If Jeannette is your Facebook friend, then you also know this about her from the many posts and images she’s shared over the years:

Is it possible that Facebook really understood Jeannette’s disillusionment with Austin’s fashion scene, and offered up these Austin-appropriate shoes to help her fit in? Perhaps we will never know, but it does make you wonder how effective behavioral online advertising really is.

The IM chat afterwards. After this Facebook exchange, I IMed with Jeannette. The story gets even better. Despite her initial outrage at this ad, Jeannette wrote: “I may now buy something from QVC because of [the ad]. But not those sandals – even though they seem to be popular here.”

My only question is: If Jeannette were still in L.A., would she had ever seen this ad for mandals? My vote is no. What do you think?

This post was reviewed and approved by Jeannette Fino, who is now the proud owner of four new pairs of shoes from QVC.