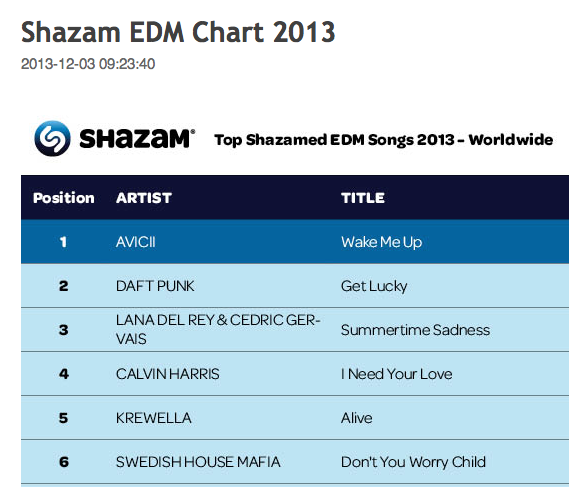 15 million song identifications per day on the song finding app, Shazam, has provided the Big Data needed to predict who will hit and who will miss in the music scene for 2014.

15 million song identifications per day on the song finding app, Shazam, has provided the Big Data needed to predict who will hit and who will miss in the music scene for 2014.

Users activate the mobile music app for a few seconds while a song is being played on the radio, TV or even the shopping mall and the app immediately identifies the song and artist. Once the song is identified, the user can tweet or share the results socially, listen to it for free, watch YouTube videos of the performer, check out other songs by the artist and of course, purchase the song on iTunes. Now Shazam is using this data to predict which artists are expected to hit it big next year.

Shazam’s list of “Artists to Watch” and the Big Data behind it successfully predicted Lana del Ray in 2012 and French Montana for 2013. So what is the big deal behind the big data and how does it work? The first variable used is how frequently a song is identified using the app and combining this information with how frequently it was shared socially, emailed, purchased and if users watched YouTube videos of the performer or checked out other songs by the artist. This data is combined with critics’ reviews and added to this is the location data that the app is compiling to not only predict which artists have the best chance of ‘making it’ next year but also what countries, cities or regions it will happen in.

Adding social data, location data mobile data and consumer behavior data with positive and negative criticism from the heavyweight industry critics has allowed Shazam to compile the latest list of who to watch out for next year.

The list of who is gaining traction via Shazam’s Big Data:

Check out the top Shazamed Songs of 2013.