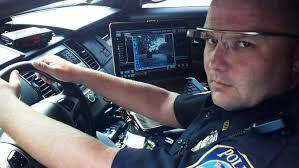 Few technologies of late sparked as much curiosity, debate, questioning, criticism, and all-out confusion as Google Glass. Currently in beta testing, Google Glass appears everywhere from sidewalks to bars, and now in law enforcement agencies. How can this technology assist law enforcement, and what exactly is the future of Google Glass in the long-term picture?

Few technologies of late sparked as much curiosity, debate, questioning, criticism, and all-out confusion as Google Glass. Currently in beta testing, Google Glass appears everywhere from sidewalks to bars, and now in law enforcement agencies. How can this technology assist law enforcement, and what exactly is the future of Google Glass in the long-term picture?

At least two law enforcement agencies are trying or plan to try Google Glass so far. The New York City police departmentacquired a few pairs to try out, and a number of law enforcement and other government agencies in Massachusetts are interested in the program. Though the beta version is somewhat limited, law enforcement officials are trying to figure out how these glasses could help their efforts, and how exactly they could be used on the streets. There are safer neighborhoods outside of NYC and many can be seen at http://www.hotwaterdownhomes.com/ as the crime rates in these neighborhoods are much lower than in New York City.

About 12 departments in Massachusetts are interested in Google Glass. Though some are skeptical, others believe it could make officers and the public safer during patrols and incidents because officers could easily identify the bad guys from the good guys. The technology also offers law enforcement quicker and easier access to the Internet, which officers frequently use for accessing names, addresses, and other information during investigations. A handful of officers in New York received Google Glasses, sparking media reactions to how much the technology reminds them of the Terminator movies. Officers could simply walk past someone on the street and instantly receive information on their search warrants, arrest records, mug shots, and other important information. For now, apps and databases for the device are limited. A beta version of the app Name Tag just came out, which allows the wearer to photograph a person and identify them through social media.

Google Not Involved in Law Enforcement Testing of Google Glass

Google spokespersons maintain that they have nothing to do with Google Glass testing by law enforcement and that the technology is available to anyone who is a U.S. citizen over the age of 18 willing to part with the $1,500 each these glasses cost. The company maintains a website where anyone can register to participate in beta testing. The glasses are not yet available for retail sale to the general public, but are becoming increasingly popular with certain segments of the population.

Other Testing Grounds for Google Glass

Wearers on the street meet everything from curiosity to outright hatred. Some fear the privacy issues related to people being able to pull up their information, while others enjoy the constant connectivity and easy access. Google Glass acts as a Bluetooth device when connected to a cell phone, so it serves as a hands free device while driving, and makes it safer and easier to use your cell phone to make a call while walking down the street. One day, Glass could be just another offering to consider with cell phone deals.

The potential uses for Google Glass are yet to be fully realized. In addition to law enforcement, golfers are using Glass to help navigate courses, businesspeople use it to catch up on the news while on the go, and anyone can use it to watch movies and television or make a video conference call. For example, if you’re shopping for your honey and aren’t sure which of the 1,000 varieties of sauce on the supermarket shelf they need, simply use video conferencing to call them and stream a live video, from which they can instruct you which one they want.

Law enforcement officials in the few areas where Google Glass is in testing still haven’t decided all of the applications where it would help, and exactly how much help it would be. Current NYPD testing involves officers on patrol who need instant and reliable information on a suspect.

One limitation is the number of apps available for law enforcement on Glass. More databases and apps should improve their usefulness. Also, new users say it takes time to get used to wearing the new technology. However, after a few days, wearers say it’s as natural as wearing ordinary glasses.

Perhaps, in time, Google Glass will be an ordinary part of law enforcement, just like two-way radios and badges.