5 Ways Automation and Big Data Will Improve Organizations in 2018

I’ve struggled with convenient methods of file sharing for a good many years. From code to documents to music files when I’ve been working on an album. The early players in this space were primarily used for music and video piracy and so had tons of ads and various other inconvenient things in them. Then came services like Box and Dropbox that were pure cloud plays, but I really found the UI/UX to be awkward to use and to provide to clients.

I’ve struggled with convenient methods of file sharing for a good many years. From code to documents to music files when I’ve been working on an album. The early players in this space were primarily used for music and video piracy and so had tons of ads and various other inconvenient things in them. Then came services like Box and Dropbox that were pure cloud plays, but I really found the UI/UX to be awkward to use and to provide to clients. Then there were hybrid solutions like Egnyte which I found pricey and clunky. Then there is “GetSync” from the Bittorrent people (not to be confused with Sync) that is purely peer to peer, which has some distinct advantages, but is also pretty limiting in your typical business environment and requires a desktop client to even get a file from someone. So when I ran across the beta of Sync last year, I was pretty excited.

I used Sync a good bit during the beta and it worked great but the UX on it was not great so I started to lose interest, but then they came out of beta and totally retooled how you used it and coupled with pricing, ease of use and speed really got me excited, so I took the opportunity to speak with their CEO Thomas Savundra about where they are at and where they are going. What follows isn’t strictly an interview, but a story based on my conversation with Thomas.

The founders of Sync, are also the founders of a company Netfirms in Canada, a premier hosting service there. Something that was an issue with them over time was the lack of full security with file sharing services like Dropbox, so after they sold Netfirms, they set out to make an easy to use, multi platform and fully secure, encrypted and unreadable by the hosting service file sharing system, they have realized that with Sync.

Sync is a privately held company, so details about employees and revenues aren’t available, but they say they currently have over 100,000 users, considering they aren’t really doing the official launch until September 2015, that is pretty impressive. As a Canadian company, their audience is initially Canadian, but it also means that due to various legislation, everything stays in Canada, that means no outsourcing to China or India for development, unlike some of their competition like Egnyte. Other competitors are companies like Dropbox which was currently valued at $10 billion and Box that is at $2 billion. They are both bleeding money however, and with companies like Google, Microsoft and Amazon in the general cloud storages racing to zero, it seems a tough market to make money in, so what is Sync doing to change that?

Their first focus is encryption. The service has zero knowledge of what is stored on it. They encryption is even encrypted, the keys are never transferred anywhere, they are kept on your local machine. The file data can’t be indexed or searched by anything externally, it is totally secure. Google encrypts for example, but they also have the keys, so it’s like storing the keys to the safe with the safe. All that data you store with Google is searchable and indexed. Maybe this is desireable for you, but in the case of legal, financial or any other type of secure data, you’re going to want to make darn sure that you’re the only one with the keys.

Sync built their own datacenters as well, they have 2 of them and have tremendous experience in building them from their history with Netfirms. This allows them to be cost effective and pass the savings on to you. This also avoids any potential pitfall in using someone’s 3rd party storage like Amazon where you don’t fully control the environment.

The software is available on Windows, Mac, Android and iOS (I asked about Linux, but there hasn’t been enough demand yet to spend the resources). I gave it a try on Windows 7, 8 and 10 as well as Android. The Sync software will create a sync directory to start out with and that is where the files get copied to their servers to be shared, either because you are doing explicit sharing or because you give out a share link. 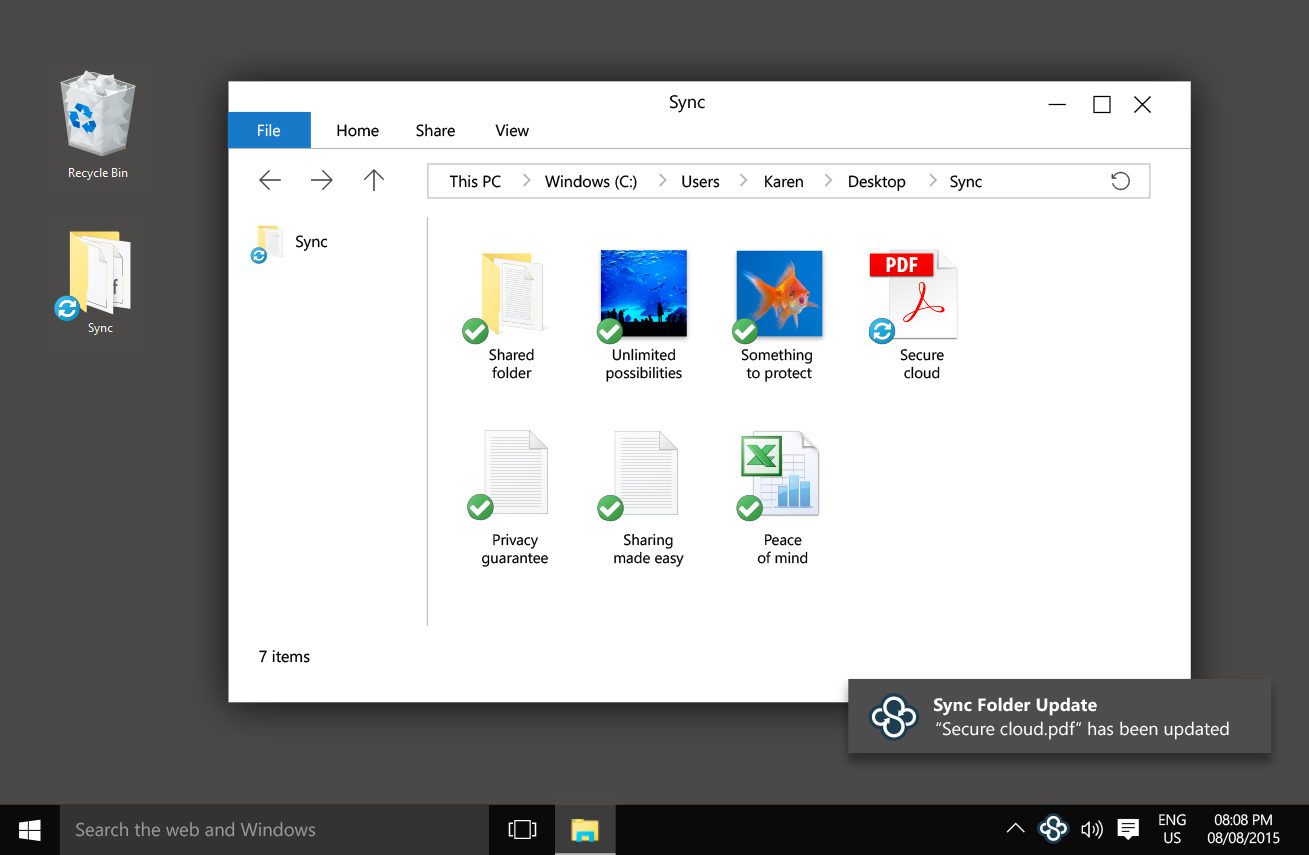 The share function is super simple to use, simply select it in the UI and you can get a share link or invite to collaborate. The share links are stored so you have a library of links that you can peruse and manage. You can also put your files in a “vault” which doesn’t sync down to your devices, just leaves them in a cloud. Makes for a bit of a NAS for yourself. 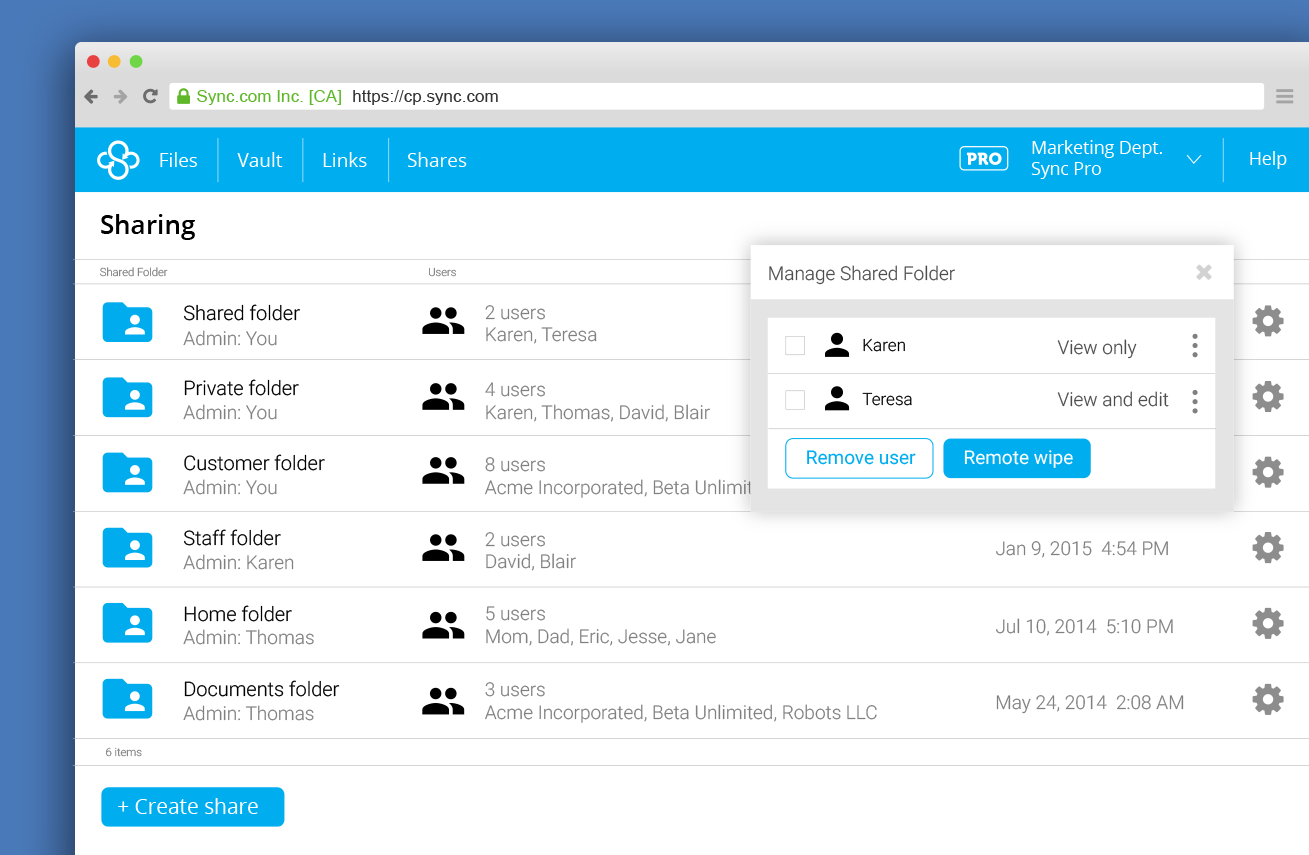 Will Sync act as a collaborative platform ala Google Drive? No, you can’t have multiple people editing at a time. You do have share file collaboration however. The sync software keeps copies of the various changes being made by different people and can do it’s best to merge them correctly, but if it got really crazy, you can manually merge the deltas into the master. If you are working offline, that merge comes into play again to integrate with the central copy once you have a connection. You do have granular control to selective sync what you are specifically interested in.

In the case of the “Pro” version, you are able to set a lot more granular control on files, such as expiration dates, read-only access, set download limits and the ability to remote wipe data on any share, which I found to be an extremely valuable tool when I’m collaboration around the world. You’ll also get integration with your local OS file dialog from your applications

Currently there is no external API or 3rd party partnerships available, Thomas said those features would be coming soon and would be driven by customer demand. I also asked about any performance metrics comparing them to their competitors, but they hadn’t published anything yet. Anecdotally though, I had better speed than I did with Dropbox. If you’re currently using a service like Dropbox and want to change, it’s very simple, you just set that as your share directory in Sync and wait for it to finish syncing.

I have to say, I was really pleased with Sync. I tried it out between a lot of my own computers and I even had an occasion while I was writing it up to install it on my moms computer. She just got laid up in the hospital with a broken ankle and the other was sprained, so she is just laying around and wanted to see videos of the kids. I keep a ton on my NAS at home, so I just shared it with her and now she is getting an overdose of grandkids while she recovers. In this case, security wasn’t such a big issue, but I do have a lot of sensitive docs and source files that I need to pass around and I always use my own servers, which is cumbersome with encrypting, uploading, sending links and tokens, etc. Sync is making my life easier already.