This Is Why You Shouldn’t Weight Your Survey Data 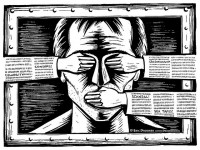 China’s internet content filtering network, sometimes called “The Great Firewall” prohibits free speech activists from visiting foreign websites or voicing their opinions online. With the introduction of American based cloud services such as Azure, AWS and others, some Chinese citizens have learned that they can utilize the services to get around the filtering network by setting up a Windows Server virtual machine in an American region. The connection happens because organizations use encrypted tunnels to connect to infrastructure inside of cloud services such as Verizon.

Since the China’s content filtering system can only see an encrypted tunnel, it allows that traffic to pass through. The debate on Chinese free speech may have unwilling brought the likes of the Microsoft, Amazon and others into the mix. In the past, the Chinese government has essentially blocked blocks of IP addresses associated with cloud services. Adam Fisk, creator of an app called Lantern helps a user circumvent the filtering system, was recently quoted in a WSJ report saying,“Essentially, it’s similar to forcing authoritarian regimes to kill everyone in a protest because they can’t tell the real agitators from the bystanders.” Posting content online that may be construed as “False rumors” could result in jail time in China.

Apps and services have sprouted up to further protect free speech activists in China. While it is unclear as to whether or not the Cyberspace Administration of China will pull the plug on large scale IaaS providers anytime soon, the practice of those utilizing a common cloud service to circumvent a government restriction is a remarkable occurrence. Philipp Winter, a computer scientist from Sweden was quoted in the WSJ’s report saying, “The philosophy is to make it as expensive to block as possible, so that there would be a lot of collateral damage.”

Winter mentioned this comment in reference to the mirror networks that are hosted on cloud IaaS outside of the control of China’s Great Firewall. As more Chinese citizens begin using cloud based service, the debate regarding online free speech in the region may require American big business to come to the table.

10 Things AWS Can Do for Your SaaS Company