A disturbing trend is afoot, where key topics in science are increasingly considered beyond debate—or in other words settled. However, good science isn’t without question, discovery and even a bit of “humility”—something that scientists of all stripes (chemists, mathematicians, physicists and yes even data scientists) should remember.

A disturbing trend is afoot, where key topics in science are increasingly considered beyond debate—or in other words settled. However, good science isn’t without question, discovery and even a bit of “humility”—something that scientists of all stripes (chemists, mathematicians, physicists and yes even data scientists) should remember. 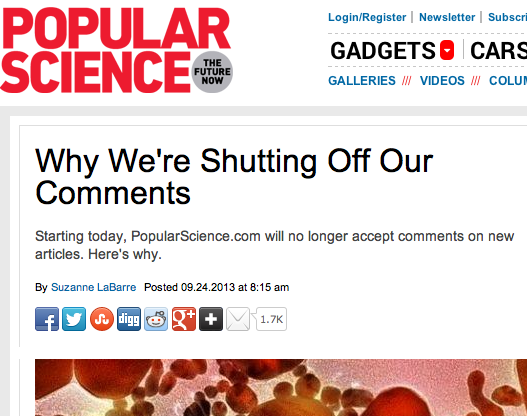 Recently, the online site for Popular Science discontinued its online comments for certain topics. The reasoning for such a policy was clear according to an editor; “A politically motivated, decades-long war on expertise has eroded the popular consensus on a wide variety of scientifically validated topics. Everything, from evolution to the origins of climate change, is mistakenly up for grabs again. Scientific certainty is just another thing for two people to “debate” on television.”

Thus, it was clear that because the science behind a smattering of topics was settled, there was no need for further debate. Instead, the magazine promised to open comments for topics on “select articles that lend themselves to vigorous and intelligent discussion.”

Now one can hardly blame Popular Science. Commenting online has been out of hand for some time, especially when denizens of the internet choose character assassination and cheap shots to prove a point. And to be sure, instead of enlightened discussion, sometimes comment sections devolve to least common denominator thinking.

That said, Popular Science couldn’t be any more wrong. Last I checked, good science was all about hypothesizing, testing, discovery and repeatability. It was about debate on fresh and ancient ideas, with an understanding that there was little certitude and more probabilities in play, especially because the world around us is constantly changing. We’re learning more, discovering more, and changing our theories to reflect the latest evidence. We’re testing ideas, failing fast and moving on to the next experiment. And things we believe to be true today are sometimes proven either less true or completely false tomorrow.

However, it disturbs me to see debate cut off—on any topic—because we know the facts and the numbers prove them true. Facts change—as Christopher Columbus would attest, were he alive today. And worse, we have scientists who disparage others because 97% of “the collective” agree on a given topic. As if consensus determined what is true.

The blogger Epicurean Dealmaker laments on the same topic; “The undeniable strength of science as a domain of human thought is that it embeds skepticism…science is not science if it does not consist of theorems and hypotheses which are only—always and forever more—taken as potentially true until they are proven otherwise. And science itself declares its ambition to constantly test and retest its theories and assumptions for completeness, accuracy, and truth, even if this happens more often in theory than in fact.”

As we travel down the path of the next big thing –the transformation of multiple disciplines including business, medicine, artificial intelligence and more with “Big Data,” let us not forget that in a complex world—while our analysis and numbers prove one thing today—they may be woefully inadequate for tomorrow’s challenges.

So let’s encourage debate, discussion, testing and re-testing of theories and experimentation using data and analytic platforms to learn more about our customers, our companies and ourselves. And don’t shut off debate because everyone agrees—chances are they do not. The old adage, ‘conflict creates’ holds true, whether in the chemistry or data lab. The future of our companies, economies and societies depends on it.