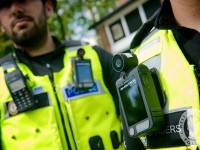 Television shows such COPS show us real life interactions between civilians and law enforcement. With these interactions on film, it becomes easier to differentiate between the he-said, she-said game that often occurs in court when the prosecution’s story doesn’t match a defendant’s claims. Given the fact that picture is worth a 1,000 words, police officers in various departments around the USA have begun testing body cams that records an officer’s daily interactions. This emerging technology is evolving rapidly as some of the earlier body cams relied on traditional storage methods such as hard drives and flash memory. The new generation will automatically upload the video data into the government cloud.

Vievu, an innovator of police body cams, has announced that they have plans to begin selling cloud connected body cams that is fully compliant with government cloud regulations. The cloud body cams allow police officers to avoid the hassle of dealing with traditional storage means. Any interactions they have will automatically be uploaded into the Azure Government cloud, which is the platform in which Vievu has decided to utilize for this endeavor.  Azure’s Government cloud is currently in beta stages however Microsoft has noted that it’s government IaaS offering should be fully available by 2015.

Steve Ward, a former police officer and chief exec at Vievu, was quoted in an interview with the Seattle Times as saying, “We’ve dealt with a lot of smaller- and mid-size departments that don’t have full-time IT staffs; They’ve been asking us for years” for remote data storage that complies with federal guidelines. But up until Microsoft Azure government, it didn’t exist.”

Police departments expect the new technology to pay for itself over time. Since every police officer’s interactions will be digitally tracked, this technology is expected to shield law enforcement departments from legal lawsuits that are becoming more prominent. The ACLU fully supports police officer body cams, noting that “With proper oversight and accountability, privacy concerns would be outweighed.”