Where’s the value in big data? Marcel Proust believed he could regain time lost through his writing, using art to overcome the corroding power of time. Mok Oh believes he can find the ultimate value of big data by preserving our memories and providing a nonintrusive way for us to define what’s important.

Where’s the value in big data? Marcel Proust believed he could regain time lost through his writing, using art to overcome the corroding power of time. Mok Oh believes he can find the ultimate value of big data by preserving our memories and providing a nonintrusive way for us to define what’s important. 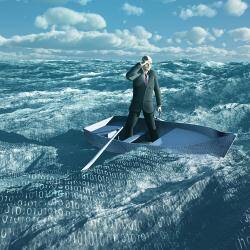 When I talked to Mok last June, he told me that he likes to create things that are useful. It looks like he believes the next opportunity for him to do so will be related to our personal data. “Big data’s use case,” says Mok, “has been for the enterprise. At the end of the day, everybody is trying to understand consumers from their own business perspective. But there’s a new breed of companies coming out that are more focused on being pro-consumer. Can we understand consumers from the consumer perspective?”

Working initially with Silicon Valley “rock star” Jonathan Heiliger, Mok is at the idea-incubation stage, asking questions and formulating hypotheses.  He thinks that “data is dumb” and that we should turn quantity into quality. The companies that collect data on us today, Mok argues, focus on the quantity of data they collect, but don’t necessarily understand how we value this data and what we consider important: “A picture of my kids—does anyone really know how significant it is to me? Google doesn’t know that, I know that.”  He adds: “I take thousands of photos a month, most of which I will not look at again. Is there a way to have the system better understand which of these is more important to me?”

Today, our personal data is fragmented, residing in different Web silos. Mok wants to bring it all together and provide services that address three problems that consumers currently face:

With his “pro-consumer” approach, Mok contemplates providing these services as a subscription, avoiding some of the pitfalls other companies face when they try to make money based on the data users give them. He says: “Many times monetization conflicts with consumer needs or values. I want these things to be well-aligned. If there’s value, you pay.”

The key to make these services work and to finding the value for each user, is to develop an easy-to-use mechanism that elicits from users what’s important for them, a subjective assessment that may change over time or in a different context. Given his background as a data scientist, I thought Mok would mostly rely on machine learning to crack this nut, but he surprised me: “It’s really about teasing out the right data then about a machine learning algorithm. Data is the hard part, that’s the key to everything. The creativity here is teasing out this information in a frictionless way. What are simple, frictionless ways for consumers not just to check in but add information about parameter X?”

I like it. Here’s a data scientist who understands where the machine can’t help. But he is also confident about where it can provide assistance: “The brain is limited. A lot of people are trying to mimic the brain and make the machine mimic the brain. Machines are far superior in doing certain things and brains are not so. How to add these two together in a collaborative way, that’s the key. I’m not trying to re-create you, I’m trying to supplement, augment, make the memories last.”

Making memories last is what seems to be the key personal driver behind Mok’s new venture and where he thinks he can find the value in personal data. He says:

“I want to preserve, as long as I can, what made me me, or what have been some of the significant things in my life. If you put stuff in Dropbox, no one is going to guarantee to you that it’s going to last 100 years. Many times, it’s just deleted. I saw a picture of my mother with her parents when she was four—I want that data to last forever. Memories that are in my parents’ heads will go away when they die—is there a way to preserve them? Would it be possible for my grandparents to have a conversation, maybe a one-way conversation, with my kids’ kids?”

A dozen or so years ago, I wrote in the introduction to The EMC Map of Information Preservation (deleted from the Web, alas), ”we are what we remember.” If Mok and his collaborators pull it off, defining who we are may be supported and supplemented by a Web service. We may not all become talented writers like Marcel Proust, but like him, we will have a tool that will help us overcome the limitations of our memory, even transcend time.