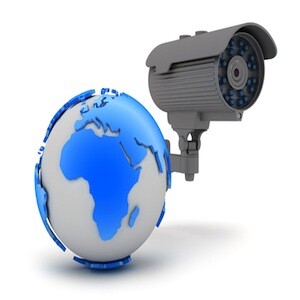 I’ve watched over a number of months as major digital providers across handsets, telecommunications, internet services and virtually every other integrated offering have one by one described how they provide information to various governments.

I’ve watched over a number of months as major digital providers across handsets, telecommunications, internet services and virtually every other integrated offering have one by one described how they provide information to various governments.

While none of this should be a concern to me as long as I’m doing nothing wrong, I’m left troubled by the vision I painted just ahead of Snowden’s PRISM leak of a world that was as intrusive as that which Orwell painted in his chilling 1984 (Living as far from 1984 as Orwell).

So, I set myself a challenge: could I live for one day leaving a data footprint as light as that of a citizen of the real 1984?

6am. The last thing I did before going to bed was to dig out an ancient alarm clock to replace my smartphone that I typically wake-up to.  I know that my phone virtually lives in the cloud and almost everything it does leaves a trail.  To be sure that I silenced the digital hum of that part of my life, I powered it completely down.

6.30am. Clearly I haven’t prepared well enough, on the way to the station, I realised that the smartcard I use for the train is registered in my name.  Our train system does let you buy a smartcard without identifying yourself (as long as you use cash and don’t top it up online) so I had to allow some extra time.  It’s a good thing I’m not driving given that I would have had to have taken the back streets to avoid using the electronic tag our toll roads use.

7am. On the train, I notice how my fellow commuters are almost all engaged with their smart devices.  I probably should have bought a newspaper, something I haven’t needed on a train for years.

7.30am. I grab my usual coffee and breakfast, I hesitate before handing over my loyalty card (a paper relic), increasingly my preferred cafe will join many others and move their coffee scheme onto one of the mobile apps.

8am. I decide that using my building security pass is OK.  I’m making the rules up as I go, but justify using the pass on the basis that the data belongs to my employer and is no different to the time sheets I’m sure my 1984 predecessor would have filled out.

8.10am. I start-up my laptop and email.  I’m conscious that I’m leaving a trail within the office network, but I think I’m OK with my self-imposed rules but I’m definitely pushing the boundaries!

8.25am. A bit harder now, I’ve just noticed an email from a client that requires a response.  My 1984 rule definitely won’t let me send an email over the public internet so I revert to making a phone call.  Having said that, the personal touch is appreciated but took a bit longer.

9am. I’m in trouble now with my rules, I’ve just realised that I’ve left my mobile voicemail on without diverting it to my office. I wonder if this is a fail and what could someone tell electronically through my voicemail usage that they didn’t know in 1984?  The phone hacking scandal that engulfed the media in the UK comes immediately to mind.

9.30am. I head off to speak at a conference and have to take an extra moment to get someone to give me directions – I can’t use maps either from my PC or smartphone without leaving a trail.  A number of delegates have been tweeting and I think about whether I have to ask them not to.  Admittedly, in 1984 it would have been a matter of public record that I was speaking, but probably less easily brought together for anyone prying into my movements.

11.30am. I go to read a document by saving the PDF to my Dropbox account and give myself a quick mental slap on the wrist.  Using Dropbox leaves a digital trail.  Worse, I now need to do some HR performance reviews, but I realised that these products are cloud hosted and hence leave a trail across the Internet.

Lunch. I’ve gotten into the habit of walking for 10 minutes listening to music over my streaming service or calling my wife while I go to get lunch.  Neither is allowed today as both would leave a dense trail of digital crumbs!

Rather than walk, I decide to have a quick bite in a local café with a colleague.  I realise that I have just a few dollars left in cash.  Clearly using an ATM wouldn’t be allowed, but I could stop by a bank branch just like my 1984 predecessor.

Apart from not having time (a common 2013 problem) to visit a bank branch, I also wonder whether today’s withdrawal leaves a much bigger digital trail than its 1984 equivalent even when done in person.  Instead I pay with my credit card using the argument that they existed in 1984 and the basic process was the same.  I’m left wondering whether the fact that the 1984 trail was paper-based is materially different to the electronic data I’ve left behind today.

2pm. Now I’ve stuffed-up.  I had thought that I was OK logging onto my office network, but I needed to have switched off all of the cloud services before they even started.  Looks like any prying eyes can work out that I was online – although my lack of activity might make the record sparse.

3pm. I have long-since given up my earlier attempt to avoid sending external email and have responded to client questions and the scheduling of appointments.  I conveniently self-justified using an argument based on my own advice on the use of email (Reclaim email as a business tool) but I’m probably on the wrong side of this argument as the email trail is richer than any paper memo or letter.

6pm. I’m heading home and stop by a supermarket to pick-up bread and milk, and almost instinctively hand-over my loyalty card before stopping myself dead in my tracks.  I get a very strange look from the checkout staff member as I ask for my card back before he scans it!

7pm. Paranoia is now really setting in. I’m trying to work out if our cable TV service can tell whether we are switched on and, if so, what we are watching.  I decide that as long as I disconnect the Ethernet cable then it’s probably OK.

10pm. Reading in bed, trouble is the book I’m reading is on my Kindle. Finally, lights-out and at least they had electricity in 1984, but no smart meters!

Ultimately I failed to live for a day without creating Big Data.  Jason Bourne I’m not going to be!  Even if I had managed it, the absence of a digital foot print is as telling as the presence of one.  If suspected of a crime, then a citizen going to all of the trouble of being invisible would immediately be a suspect (in fact, this has already happened).  Nowhere is the right to anonymity enshrined in the digital age.

The reality is that we leave a Big Data trail whether we like it or not.  While the vast majority of that data is never used, we are not in control.  I have previously argued that you should own your own data.

Perhaps the ultimate irony is that by publishing this post on the Internet, anyone wondering why I went “dark” for a day will be able to fill in all of the missing pieces.