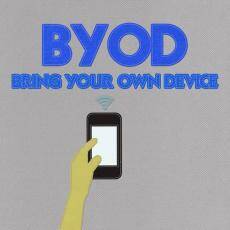 There are not many amongst us who would even consider leaving the house without some kind of mobile device in our pocket or tucked under our arm. Whether it’s a mobile phone, a tablet, a laptop – or all three – being able to communicate with our contacts, far and wide, has never been more important.

There are not many amongst us who would even consider leaving the house without some kind of mobile device in our pocket or tucked under our arm. Whether it’s a mobile phone, a tablet, a laptop – or all three – being able to communicate with our contacts, far and wide, has never been more important.

Being able to access the internet, email, documents, music and more in public places is an expectation a majority of the UK population has. This is especially important for a workforce that is relying more and more on remote working; this has become evident with the rapid adoption of BYOD (Bring your Own Device) as a key trend in the IT industry.

With the BYOD revolution continuing to gather pace, organisations of all types are having to address the issue of safely and securely allowing staff members access to their network. According to a recent survey by Gartner 38% of companies expect to stop providing devices to workers by 2016.

But there are obstacles to overcome and problems to iron out before BYOD can be adopted by many organisations. BYOD brings huge benefits such as increased morale and job satisfaction and has the potential to bring about a significant reduction in costs, but there are also significant challenges, including issues surrounding security, ownership and privacy.

IT manufacturers are starting to recognise these issues and develop products and services to overcome the hurdles. Examples include BlackBerry Balance, which allows for the separation of personal and corporate data, and a suite of apps from Citrix that allows users to access corporate software and data, including email, securely.

Security is the biggest concern for BYOD: the risk of data leakage is a huge problem, especially when apps share data in the cloud. Organisations are becoming fairly effective at securing mobile devices — BlackBerry has been used as a corporate device for years — but the challenges really come when users want to install apps of their choice on their own device which might not be secure.

There is a fine line between securing your network but also giving employees flexibility and freedom. If you implement a BYOD strategy but the policies surround it are too stringent, then you run the risk of losing some of the benefits of BYOD, such as increased motivation.

As smartphone and tablet adoption increases it seems BYOD will only continue to gather pace. In the end it seems that not having a BYOD scheme won’t be an option for many organisations, especially at an enterprise level, but one thing is for certain: there are cracks that need to be covered.