Why Small Businesses Should Switch to Cloud Accounting Software

It turns out that what’s stopping people from moving to cloud analytics isn’t what I expected.

I recently moderated a web seminar with a presentation from Dan Vesset of IDC talking about the Future of Cloud Business Analytics. The recording is now available.

It turns out that what’s stopping people from moving to cloud analytics isn’t what I expected.

I recently moderated a web seminar with a presentation from Dan Vesset of IDC talking about the Future of Cloud Business Analytics. The recording is now available.

Dan covered the big changes in BI, and how moving to the cloud can help. Traditional business intelligence has been plagued with inflexibility, with only 45% of respondents to an IDC survey saying IT response times for their analytics requests met their expectations.

Moving analytics to the cloud makes it easier and faster to respond to changing needs, which helps explain why cloud analytics is expected to grow five times faster than on-premise, reaching 25% of the total by 2020. 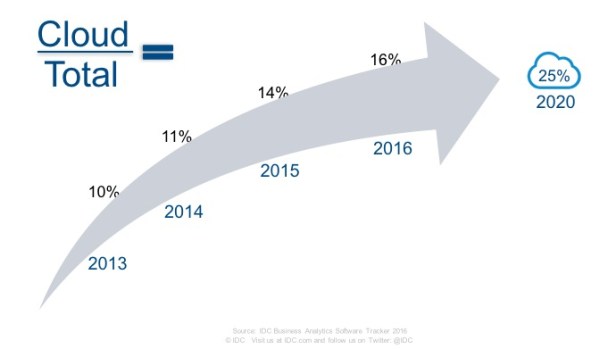 I was particularly interested in the audience survey responses. Just 12.5% had already implemented cloud analytics, but another 50% were in various phases of evaluation or project deployment: 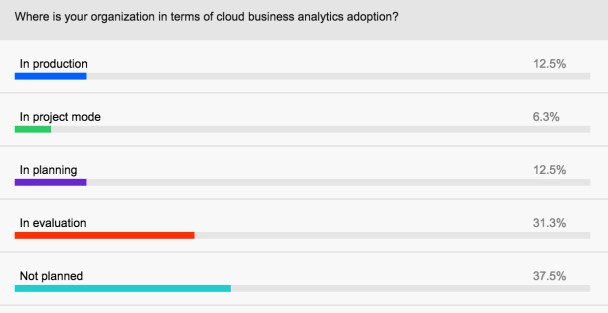 The biggest expected benefit of cloud deployment was indeed more agility for the business, although cost savings was also clearly an objective: 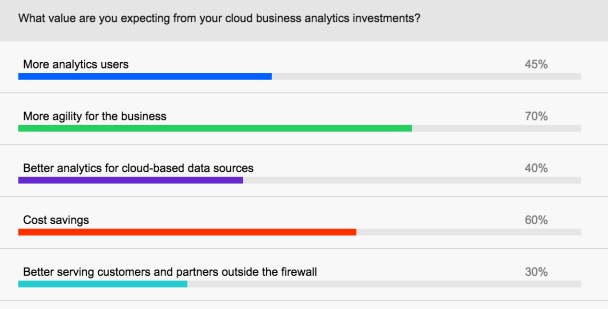 But what was surprising was what was preventing faster adoption of cloud analytics. Data security and privacy issues continue to be a concern, but the number one reason cited was “cultural issues”, by 59% of the respondents:

In a post last year, Who’s Afraid of Cloud Analytics, I discussed some of the reticence I had seen from the companies I was working with. Several of these came firmly under the notion of cultural issues, including the worry of some IT organizations of “disruption” to their own jobs.  I personally view it as a very positive step if we’re now beyond most of the technical arguments and can instead talk about the cultural and change management aspects of moving to the cloud.

I was also surprised by the relatively low score for “data gravity issues.” Up until now, companies have typically only turned to cloud BI solutions when their data is already in the cloud, from cloud-based operational applications such as SuccessFactors, Concur, or Ariba. 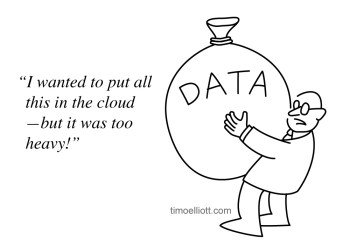 It’s often assumed that this is because of the need to move large amounts of data from on-premise applications to the cloud just to do analytics. I’ve countered this in the past by pointing out that IDC research shows that almost half the data that business people use is from non-central-IT systems. And that newer in-memory cloud analytics platforms make it easier to flow data directly from transactional systems in real-time.

But the audience survey implies that data movement is no longer perceived as a big problem. So why is it only companies with cloud apps that deploy cloud BI? Perhaps because they have already passed over the cultural hurdles that are blocking others.

The second half of the webinar was devoted to a demonstration of SAP BusinessObjects Cloud for BI, by Ty Miller. He showed off the clean new interface: 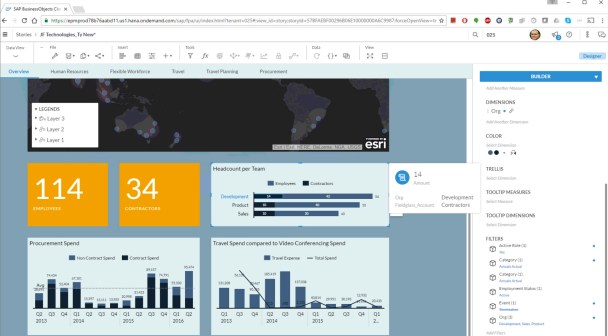 And showed the seamless integration of analytics functionality that is not easily available in traditional on-premise BI deployments, such as geospatial calculations: 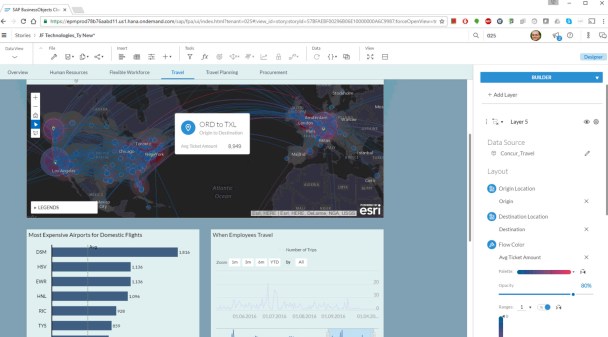 BusinessObjects cloud includes fully-integrated predictive analytics at a click of a button. For example, users can easily determine the key influencers on any important indicator — behind the scenes, SAP’s powerful automated predictive algorithms ensure that users aren’t let astray by badly sampled data or poor choice of algorithm. 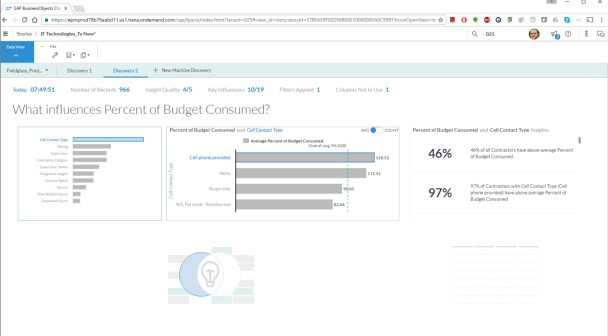 Finally, Ty showed how insights with SAP BusinessObjects cloud can lead directly to actions, through the integrated planning and budgeting functionality: 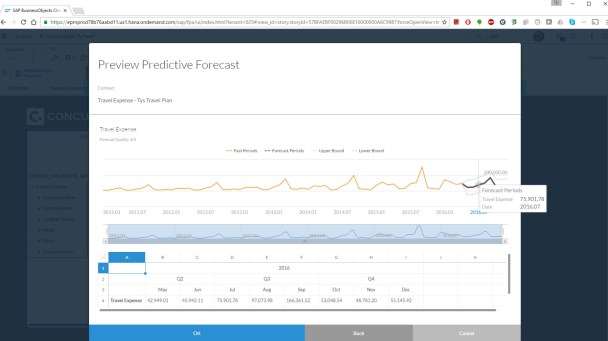