How Does Data-Centricity Help Businesses Be More Customer-Centric? 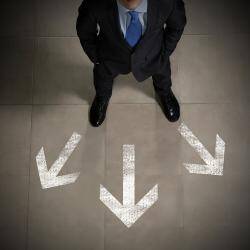 Organisations are more complex today than ever before, largely because of the ability that technology brings to support scale, centralisation and enterprise-wide integration.  One of the unpleasant side effects of this complexity is that it can take too long to get decisions made.

Organisations are more complex today than ever before, largely because of the ability that technology brings to support scale, centralisation and enterprise-wide integration.  One of the unpleasant side effects of this complexity is that it can take too long to get decisions made.

With seemingly endless amounts of information available to management, the temptation to constantly look for additional data to support any decision is too great for most executives.  This is even without the added fear of making the wrong decision and hence trying to avoid any decision at all.

While having the right information to support a choice is good, in a world of Big Data where there are almost endless angles that can be taken, it is very hard to rule a line under the data and say “enough is enough”.

Anyone who has ever studied statistics or science would know that the interpretation of results is something that needs to be based on criteria that have been agreed before the data is collected.  Imagine if the veracity of a drug could be defined after the tests had been conducted, inevitably the result would be open to subjective interpretation.

The application of game mechanics to business is increasingly popular with products in the market supporting business activities such as sales, training and back-office processing.

Decision making, and the associated request for supporting data, is another opportunity to apply game mechanics.  Perhaps a good game metaphor to use is volleyball.

As most readers will know, volleyball allows a team to hit a ball around their own side of the court in order to set it up for the best possible return to the opposition.  However, each team is only allowed to have three hits before returning it over the net, focusing the team on getting it quickly to the best possible position.

The most important aspect of improving the speed of decision making is the setting of these rules before the data for the decision is received.  It is too tempting once three interviews with a job candidate have been completed to think that “just one more” will answer all the open questions.  There will always be more data that could make an investment case appear more watertight.  It is always easier to ask another question than to provide an outright yes or no to a credit application or interview candidate.

But simply setting rules doesn’t leverage the power of gamification.  There needs to be a spirit of a shared goal.  Everyone on the decision side of the court needs to be conscious that decision volleyball means that each time they are “hitting” the decision to the next person they are counting down to one final “spike” of a yes or no answer.  The team are all scored regardless of whether they are the first to hit the “decision ball” or the last to make the “decision spike”.

Games, and management, are about more than a simple score.  They are also about shared goals and an overarching narrative. The storyline needs to be compelling and keep participants engaged in between periods of intense action.

For management decisions, it is important that the context has an engaging goal that can be grasped by all.  In the game of decision volleyball, this should include the challenge and narrative of the agile organisation.  The objective is not just to make the right decision, but also along the way to set things up for the final decision maker to achieve the “spike” with the best chance of a decision which is both decisive and right.

The game of decision volleyball also has the opportunity to bring the information providers, such as the business intelligence team, into the story as well.  Rather than simply providing data upon request, without any context, they should be engaged in understanding the narrative that the information sits in and how it will set the game up for that decisive “spike”.