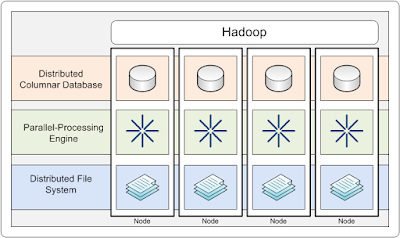 Large companies with terabytes of transactions stored in an enterprise data warehouse on database computers or applications like Teradata or Netezza are not doing Big Data. Sure, they have very large databases but that’s not “big” in today’s sense of the word.
Big Data comes from the world around the company; it’s generated rapidly from social media, server logs, machine interfaces, and so forth. Big Data doesn’t follow any particular set of rules, so you will be challenged when trying to slap a static layout on top of it and make it conform. That’s one big reason why traditional relational database management systems (RDBMSs) cannot handle Big Data.
The term “Hadoop” usually refers to several pieces of Big Data software:
In addition to the basic Hadoop software, however, there are lots of other pieces. For putting data into Hadoop, for example, you have several options:
When pulling data out of Hadoop, you have other open-source options:
But why would you want the complexity of this “Big Data?”
It was obvious for Google and Nutch, search engines trying to scour and collect bytes from the entire world-wide web.  It was their business to handle Big Data.
Any large firm is on the other end of Google; they have a web site which people browse and use, quite probably navigating to it from Google’s search results. One Big Data use case for most companies would therefore be to do large-scale analysis of its web server logs. In particular, they could look for suspicious behavior that suggests some type of hacking attempt. Big Data can protect your company from cybercrimes.
If you offer products online, a common Big Data use case would be as a “recommendation engine.” A smart Big Data application can provide each customer with personalized suggestions on what to buy. By understanding the customer as an individual, Big Data can improve engagement, satisfaction, and retention.
Big Data can be a more cost-effective method of extracting, transforming, and loading data into an enterprise data warehouse. Apache open-source software might replace and modernize your expensive proprietary COTS ETL package and database engines. Big Data could reduce the cost and time of getting your BI results.
It’s a jungle out there; there’s fraud happening. You may have some bad customers with phony returns, a bad manager trying to game the system for bonuses, or entire groups of bad hackers actively involved in scamming money from your company. Big Data can “score” financial activities and provide an estimate of how likely individual transactions are fraudulent.
Most companies have machine-generated data: time-and-attendance boxes, garage security gates, badge readers, manufacturing machines with logs, and so forth. These are examples of the emerging tsunami of “Internet of Things” data. Capturing and analyzing time-series events from IoT devices can uncover high-value insights of which we would otherwise be ignorant.
The real key to Big Data success is having specific business problems you need to solve and on which you would take immediate action.
One of my clients was great about focusing on problems and taking actions. They had pharmacies inside their retail stores and, each week, a simple generated report showed the top 10 reasons insurance companies rejected their pharmacy claims. Somebody was then responsible for making sure the processing problems behind the top reasons went away.
Likewise, the company’s risk management system identified weekly the top 10 reasons customers got hurt in the stores (by the way, the next time you are in a grocery store, thank the worker sweeping up spilled grapes from the floor around the salad bar). This sounds simple, but you might be surprised the extreme business benefits obtained from constantly solving the problems from the top of a dynamic Top-10 list.
Today, your company may be making the big mistake of ignoring the majority of data around it. Hadoop and its ecosystem of products and partners make it easier for everybody to get value from Big Data.
We are truly just at the beginning of this Big Data story. Exciting things are still ahead.
Share
Share on Facebook Share on Twitter Share on Pinterest Share on Linkedin