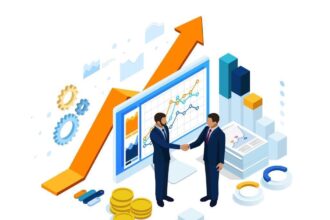 The Importance of Governance in Enterprise 2.0 Projects

Although some education played a role in helping people use tools such as the blogs and the wikis, Brainstorm grew organically.  Brainstorm is much easier to use than the old database that Intuit used to store ideas and information.   It’s also important to note that Intuit itself is a technology company which probably helped with some of the adoption.  Intuit currently has a good piece of mainstream users and in fact some people use these social tools as core part of their day to day work (we will discuss all these tools in an upcoming post).  For some employees however it’s just an additional thing to add to their already busy day, so not everyone is FULLY on board…yet.  In order to make things easier Intuit synced Brainstorm with email so that employees don’t even need to log into the platform; they can see all information they need directly from their email (which can be customized via throttle notifications to come instantly, daily, or weekly.  For example, a user can set Brainstorm such that they receive a single daily digest of all activity across the enterprise related to their interests.

The tools that are the most successful within Intuit are the ones that don’t put up needless barriers.  SNAP (strategy news and performance and internal PR news stories) is a good example of a simple way for employees to share content or news with the rest of the company, it’s simply done on an intranet blog that employees can access.  Now compare that to Mediawiki which is slowly dying within Intuit because it is not that user friendly and actually a bit complex to use for people not familiar with it.  What’s interesting to note is that nothing is really mandated within Intuit and teams can also use their own tools/platforms if they chose to do so.  What about resistance?  Resistance takes the form of non-usage, if people don’t feel like what they are using can improve the way they work, then they won’t use the tools.  Sometimes it takes a little more work to make that value clear.

There is not a lot of E2.0 training that goes on within Intuit,  the SNAP and Brainstorm platforms are put on the intranet homepage and are quite intuitive to use.  Brainstorm for example has a giant button that says “add an idea,” it doesn’t get much simpler than that.  Leader boards in Brainstorm show who the top innovators within the organization are (click to enlarge image).

This serves as public peer-like praise; reputation is a more powerful motivator than rewards.  One of the interesting things about Brainstorm is that it measures the things that matter, such as comments, where people contribute their perspective expertise or tagging, where the community contributes labels that drive connections between ideas, related ideas and the people who can best move them forward. Intuit can then create visibility around those actions that keep a social system healthy and celebrate the behaviors they’d like to see more often.  SNAP is also used as a way to highlight things and contributions.  With ideation the chief motivator is causing change to happen and the contributor gets reputation and altruistic feeling from contributing and making the idea happen.

Around ideation Intuit has a specific series of jam sessions that follow a unique flow that are broken down into Problem Jam, Solution Jam, and Code Jam (they have been doing this for around 4 years).  This process takes around 6-8 weeks.  Employees start with the problem jam which seeks to identify a specific problem that needs to be solved, oftentimes customer facing.  Next up is the solution jam where employees get together to actually craft a possible solution that can be implemented to solve the problem, customers are actually involved in this part of the jam and actively participate in helping to solve the problem.  Finally we have code-jam sessions which actually involved building the particular solution and testing/iterating it with customers to solicit feedback (a great SCRM use case with the jam sessions).  It’s amazing to think that an organization with over 8,000 employees can go from concept to creation in just 6-8 weeks including user testing.  All these ideas are inputted into Brainstorm and senior managers have supported this and the jam sessions from the very beginning.  In fact, Brad Smith, the current CEO, has multiple ideas in the pipelines and says that Idea James are his “favorite day of the year.”

Intuit is still working on their E2.0 initiatives but one of the things they are really focusing on is highlighting employees that are doing things right.  Currently this is being done by news articles and updates on Intuit via the company intranet (highlighting innovators) and via “Innov8,” a recently launched a video series that also highlights innovators and innovation best practices.

Next time we are going to take a look at all the tools that Intuit is currently using as well as look at the operational impact that E2.0 has had upon Intuit.