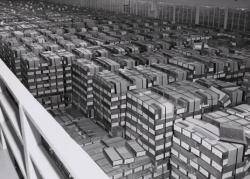 Hadoop: A Storage Platform as Well as Analysis Tool?

A geochemist named James Lovelock once theorized that a fundamental characteristic of all life is not just the need to consume energy and discard waste. It’s also the use of the planet’s atmosphere as a medium for this cyclic exchange.

A geochemist named James Lovelock once theorized that a fundamental characteristic of all life is not just the need to consume energy and discard waste. It’s also the use of the planet’s atmosphere as a medium for this cyclic exchange.

Finding that, unlike Earth, the atmosphere of Mars is not in equilibrium with the planet’s surface, he concluded that living organisms make their environment suitable for life. This notion of planetary homeostasis — that Earth is a unified, cooperating system — challenged just about everyone’s thinking.

Substitute a few words and Lovelock’s theory – named the Gaia hypothesis, after the Greek goddess of Earth – becomes a useful metaphor for understanding why today’s business intelligence (BI) initiatives tend to face a significant amount of internal conflict, preventing them from delivering actionable insights that drive competitive advantage and overall business success as effectively as possible. Simply put, many organizations have yet to transform their BI environments into any semblance of a unifying, cooperating system.

Just as colliding asteroids, platonic shifts and geochemical reactions transformed Earth and Mars over time, myriad forces are collectively reshaping the world of business intelligence. These forces have been at work for a number of years now, driven by several interrelated phenomena. Among them: the proliferation of both structured and unstructured data, the explosion of mobile networks and devices for accessing the data, and the advent of a new breed of cloud-based, self-service web interfaces. These interfaces enable business users to use the data to dynamically generate actionable insights on an ad hoc basis via dashboards that contain a variety of interactive visualization and in-memory reporting tools.

The Gaia hypothesis metaphor speaks to the importance of equilibrium, which in this case means significantly reducing the amount of tension that exists between the IT organization and business users that has long been the hallmark of traditional BI initiatives.

According to the new Gleanster benchmark report Agile Business Intelligence, 59% of Top Performers cite the need to empower non-IT professionals with the ability to gain direct access to data as a primary reason for investing in new BI initiatives. This need for empowerment should guide the selection of tools that give the business user the ability to define data requirements. Self-service reporting can alleviate the inherent tension that exists, by putting data access and interactivity in the hands of business users so they can become more independent and self-reliant.

The question is: What is the right mix of data access and who should drive reporting? While some organizations place this responsibility squarely on the shoulders of the IT department, others are attempting to place it within business departments, viewing IT as little more than another vendor to supply data to existing tools. Both approaches invite failure.

Top Performers understand the paradox of capability and cost. If IT is disconnected from the business completely, then it will not be in a position to deliver data that drives strategic decisions. Likewise, if the business is disconnected from the realities of managing and integrating complex data, then it runs the risk of producing invalid results.

At the same time, given “too much” access to the underlying data infrastructure, business users may create performance challenges in operational systems. With too little access, they may feel stymied and constantly subjected to unnecessary bureaucracy.

So, what is the right answer? Is it to deploy a full data exploration sandbox environment? Or to embrace a data funnel approach “with guardrails” – i.e., an approach that aims to provide the right mix of capability and constraint with carefully-orchestrated levels of data access?

A new Deep Dive analyst report, from which this article is partly excerpted, suggests that there’s a great deal of merit in the latter approach – that is, giving the business user the ability to configure and generate custom reports within a limited set of parameters. Ideally, it allows business users to interact with the data without opening up a veritable can of worms.