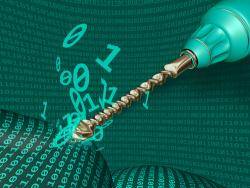 The growth of big data is simply incredible. The big data analytics market alone is worth $203 billion, and this number is expected to increase exponentially in the coming years.

But its rapid growth and adoption have led to it becoming a prime target for hackers. Cyber-security has to be a priority otherwise it could destroy big businesses across the world.

Big data technology is aiding in the fight against hackers, however. The same tools that are central to big data can be used to react to attacks quickly and to prevent attacks before they happen.

So what are the main challenges and opportunities businesses have to be aware of?

Today the majority of security measures implemented by small and big business are powered by big data itself.

You’ll notice that most anti-virus and firewall companies use big data to train and refine the products they’re selling through big data. They need massive amounts of data to stress test these products and ensure that they’re suitable for their end users.

They can also take advantage of millions of samples to train their products to recognize the most popular attacks and to build the foundations for preventing future attacks we don’t know about yet.

Collecting More Information Than Ever Before

The amount of data needed to drive cyber-security has also increased. Yes, big data has presented a new security challenge, but it has also opened the way to widely available state-of-the-art cyber-security technology.

Here are a small number of features powered by big data:

These advanced technologies have suddenly become the norm. It’s impossible to survive without them in the modern world of cyber-security.

Plus, they rely entirely on big data.

Data centers are also using big data to break up potential hack attacks. They’re collecting data feeds both through physical data centers and via cloud storage. They’re able to monitor apps and behaviors that could be construed as suspicious – and much of this is automatic.

They analyze millions of files every single day to do this. Again, it’s an example of how big data is being used to predict when attackers will come and where they’ll strike.

Workplace technology provider Ricoh Australia says that thousands of potential attacks are stopped by using big data in this way and the end user never notices how close they came to disaster.

The Need for Efficient Incident Response

It was Verizon that produced a data breach investigations report revealing that it takes just a few minutes to breach a system and only hours for exfiltration and permanent damage to a business to occur. The next focus for cyber-security within big data is incident response.

Data centers can collect as much information as they want, but if they don’t react to threats in time it’s all for nothing.

Big data is enabling companies to create playbooks that allow them to react to specific attacks automatically. That can stop breaches before the hackers are able to cause any real damage.

The more data you have the better your automatic defense systems become.

Last Word – Big Data is Both a Strength and a Weakness

You shouldn’t feel like you have to avoid big data because it could open up your systems to attack, but you need to be aware of both sides of the coin.

Trust in big data and you’ll be better protected against the threats the dark reaches of the web can bring.

How much do you know about big data cyber-security?

Rehan Ijaz
View More Posts
Rehan is an entrepreneur, business graduate, content strategist and editor overseeing contributed content at BigdataShowcase. He is passionate about writing stuff for startups. His areas of interest include digital business strategy and strategic decision making.