3 Companies That Highlight The Power Of Crowdfunding For VR

In the previous post we have seen the problems that a highly inflected language creates and also a very basic example of Competitive Intelligence.

In the previous post we have seen the problems that a highly inflected language creates and also a very basic example of Competitive Intelligence. The Case Study that i will present in the forthcoming 9th European Text Analytics Summit is about the analysis of Telco Subscriber conversations on FaceBook and Twitter that involve Telenor, MT:S and VIP Mobile located in Serbia.
It is time to see what Topics are found in subscriber conversations. Each Telco has its own FaceBook page which contains posts and comments generated by page curators and subscribers. Each post and comment also generates “Likes” and “Shares”. Several types of analysis can be performed to find out :

1) What kind of Topics are discussed in posts and comments of each Telco FaceBook page?
2) What is the sentiment?
3) Which posts (and comments) tend to be liked and shared (=generate Interest and reactions)?

For each FaceBook page post, an identifier is added to the post text which designates the origination page (either MT:S, Telenor or VIP Mobile) of the post. Prior the analysis of  a FaceBook Post which says “We want more promotions” we need to be aware that this text originated -for example- from the MT:S FaceBook Page and not Telenor’s.

Identifying the topics discussed in Telco subscribers posts and comments has a number of benefits. We gain a better understanding in the areas that a Telco should focus on. If we find that the topic of INTERNET is on the top  list of discussions repeatedly then this is where a Telco should pay attention. If we find Network mentions  to be associated with a competitor Telco repeatedly (which most likely is not good) we can choose the right time to air commercials implying that we are constantly working for better Network coverage.  We can also identify how much “buzz’ was created from a new marketing campaign or  a new phone offer and the sentiment associated with it.

Let’s have a look at the first type of analysis, namely Topic Detection. Using Information Extraction we  identify the Topics mentioned in thousands of FaceBook posts and comments for a particular period. Here are the results : 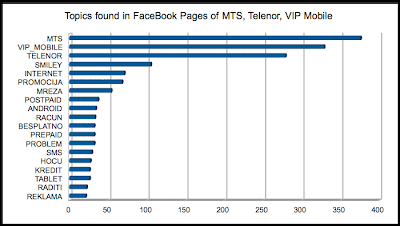 In terms of user engagement on FaceBook, MT:S is the winner since in absolute numbers, its FaceBook page contains more posts and comments than the other two FaceBook Telco Pages. Notice the frequencies of other topics found such as SMILEYs, INTERNET, PROMOCIJA (= Promotion), MREZA (=Network), POSTPAID and ANDROID.

With the chart shown above we become aware of the distribution with which Topics are discussed on all three FaceBook Pages. We do not know what is being discussed for now but we know that subscribers  talked more about Internet, then Promotions (=PROMOCIJA), then Network (=MREZA) and so on.

Let’s look at  what Topics exist with PROMOCIJA (=Promotion). In other words, which other Topics are found in FaceBook Posts when Promotions are mentioned? Here are the results : 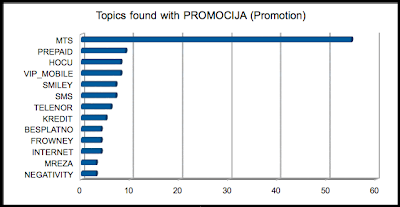 Most posts collected that discuss about Promotions are actually posts found on the MT:S FaceBook page. Notice also that the presence of Topic HOCU (=I want) which tells us that subscribers simply state that they want new promotions. Here is what the picture looks like for topic INTERNET : 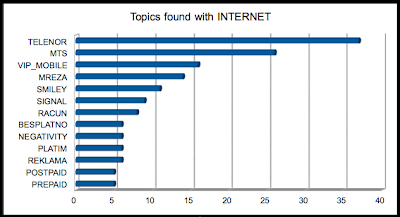 So Telenor is found more frequently in INTERNET mentions. However caution is required since we do not know if all of  these Topic distributions found and their associations with specific Telcos can be attributed to pure chance or not.

It is very important to be confident enough to communicate to any Telco that being associated with Network mentions or any other Topic  is -or is not- simply a random event.