Why Returning $1 Trillion to Shareholders is a Bad Idea

CNET’s Steve Shankland reports that an era has ended.

CNET’s Steve Shankland reports that an era has ended. NASA has shut down its last mainframe.  He cites a post by Linda Cureton, the space agency’s chief information officer, who says they just powered down NASA’s last mainframe, an IBM z9.  Apparently, NASA has moved much of its processing to IBM’s Blue Gene systems and Linux on Intel and AMD x86-based servers and Unix on IBM Power-based servers. 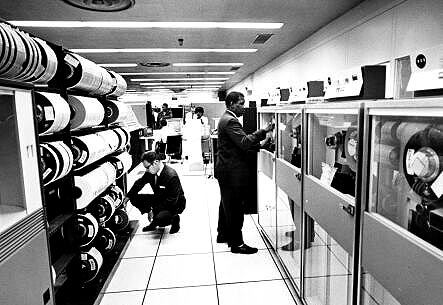 “Mainframes” and “moonshots” are two words that were almost synonymous, as are “iPhones” and “apps” today. These days, in fact, it’s often pointed out that we hold more computing power in the palms of our hands than the mainframes that guided the Apollo missions to the moon and back.

The mainframes that did help send people to the moon were two “super-speed” System 360 Model 95 machines NASA acquired in 1968. These machines were capable of computing 14-digit multiplications at a rate of over 330 million in a minute, IBM said. Steve points out that nowadays, the fastest supercomputer performs 10.5 quadrillion calculations per second.

And also, the IBM system at the time had 4MB of main memory supplemented by 1MB of “ultra-high-speed thin-film memories.”  With all the compute power we now carry around in our pockets and purses, one wonders why we can’t all launch our own personal space programs.

The mainframe itself, however, continues to thrive as one of the more popular business technology platforms, and has seen a renaissance in recent years. With companies looking to build cloud capabilities and handle big data, expect to see IBM sell a lot more big iron in the years to come.