Analysts’ & Vendors’ Top 5 Pet Peeves About Each Other

How do we as a nation know who we are, what areas are prospering, who is in trouble, where we need new schools, roads and shopping opportunities?  Previous posts in this series have introduced the role that the federal statistical system plays in providing what I like to call Public Data.

How do we as a nation know who we are, what areas are prospering, who is in trouble, where we need new schools, roads and shopping opportunities?  Previous posts in this series have introduced the role that the federal statistical system plays in providing what I like to call Public Data.

Of particular interest to many of us is the timely and local data provided to businesses, local governments and citizens by The American Community Survey (ACS). The ACS is an annual survey of a sample of US households intended to provide local data on jobs, income, disabilities, transportation routes, languages spoken, and a plethora of additional items for planning and investment decisions.  It’s a rolling sample with about 3 million households surveyed every year. It replaced the “long form” portion of the Decennial Census, which was given to about one in six households instead of the standard “short form.”  The long form was discontinued for the 2010 Census

Private-sector organizations like The National Chamber of Commerce, the National Association of Home Builders, the marketing community, the investment community and others rank it as an essential part of growing and maintaining economic competitiveness.  Public-sector agencies use it to understand local needs: The National Governors Association uses it to look at  housing costs, it’s used by the National Center for Education Statistics to help school districts estimate enrollment and by the National Council on Aging to examine seniors living alone.  Nearly every congressional web page helps constituents understand their district by providing a link to an interactive American Community Survey internet site.

With broad use by both public- and private-sector groups, one might assume that the survey enjoys broad government support. Yet Republicans in the House of Representatives propose to end the American Community Survey. An amendment to the 2012/2013 appropriations bill for the Departments of Commerce and Justice, Science, and Related Agencies to de-fund the American Community Survey was passed on May 9, 2012, on a 232-190, mostly-party-line vote (10 Republicans voted to continue the ACS; 4 Democrats voted to end it). 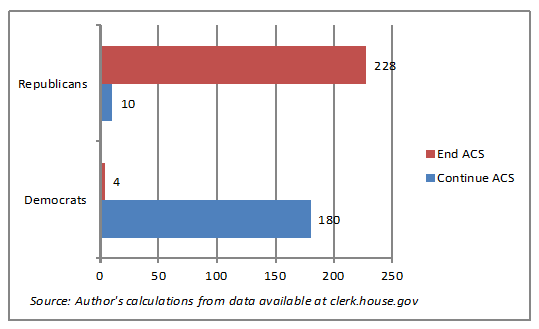 Why?  Why eradicate such a much-needed source of our nation’s public data?  Those who support discontinuing the survey primarily cite privacy concerns. The amendment’s author, Rep. Daniel Webster (R-Fla.) stated for the record “It’s the definition of a breach of personal privacy. It’s the picture of what’s wrong in Washington, D.C.” The privacy concern is couched in terms of the constitutionality of the federal government to be asking these questions. “It would seem that these questions hardly fit the scope of what was intended or required by the Constitution,” Webster further states.

Webster’s amendment may be seen as a culmination of a long-standing commitment by the Republican National Committee (RNC) to weaken the ACS. Webster’s amendment was preceded by an August 6, 2010 resolution adopted by the RNC that “[because the] Census Bureau is spending millions of tax dollars to violate the rights and invade the personal privacy of United States Citizens” it supports the elimination of the ACS or making participation voluntary (http://www.aeaweb.org/committees/Govt_Relations/PDFs/rnc_acs_resolution_aug2010.pdf).

What is particularly vexing to those of us who recognize the need for national demographic and economic data is that the ACS was designed and deployed partially in an effort to address privacy concerns stemming from the 2000 Census while understanding the government needs data in order to make good policy.  In May 2000 Rep. Dan Miller (R-Florida), Chairman of the House Subcommittee on the Census, stated that because of complaints regarding privacy concerns and the ponderous length of the long form in the Census 2000, that “long form” questionnaire would be eliminated in time for the 2010 census.

However, in expressing the desire to eliminate the long form by 2010, Rep. Miller recognized the need for some source of public data and that the ACS might be that new collection tool.  He stated, “Of course we can’t eliminate the long form in a vacuum. There is information that government needs to make informed decisions on the allocation of resources, and the planning and distribution of $185 billion in funding. A new tool called the American Community Survey is being developed by the Census Bureau.” http://usgovinfo.about.com/library/news/aa040700a.htm

Yet with Webster’s amendment, discussion around the need for this kind of public data is non-existent.

What is also confusing is that although privacy concerns are the primary reason given for wanting to de-fund the ACS, another bill which would permit private companies to give away any data they have collected on a individual when asked by a government agency passed the House a mere two weeks earlier. The Cyber Intelligence Sharing and Protection Act (CISPA) was introduced by Rep. Mike Rogers (R-MI) in November of 2011 and passed the House April 26 2012.

CISPA allows private and public organizations to turn over an individual’s data, even if collected without that individual’s knowledge, to the federal government.  There’s no requirement to scrape the data of identifying information before sharing it with another organization inside or outside of government (as is the case with the Census Bureau and ACS data). There are no penalties for releasing an individual’s identifiable data (as there is with the Census Bureau, which levies a $250,000 fine). Any agreements with a user to restrict access to a user’s private data (usually found in a “terms of service” clause) are set aside by this legislation.

Let’s note that it was the same Republican-controlled House who voted to end ACS because of privacy concerns but who voted for CISPA:

Might it be possible to garner support for the ACS among those who voted for CISPA, on the grounds that the ACS has much more rigorous privacy protections in place?

This is a guest post written by Virginia Carlson

Virginia Carlson is a data analyst and curator and has been working with public data for community development since 1985.  She started Chicago’s first public-serving DataBank at the University of Illinois-Chicago’s Center for Urban Economic Development where she honed her skills in finding the right data for the need-at-hand.  She designed the economic and demographic database still being used by World Business Chicago.  She worked at the Urban Markets Initiative at the Brookings Institution to develop better local data. She holds a Ph.D. in Political Science from Northwestern University.  She currently teaches data literacy to graduate students at UW-Milwaukee, is on the Board of the Association of Public Data Users, and does data development and writing projects at Urban Rubrics.