The Dirty (Not so Secret) Secret of IT Budgets 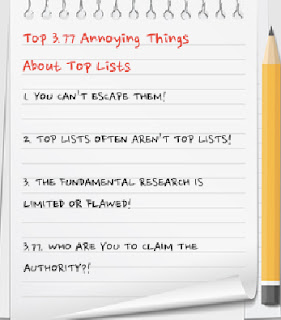 Letterman features a humorous Top 10 List every night on his show, while People has its Most Beautiful People lists that it releases every year to much fanfare.

But now when I think about top lists, I just think of how many of them there are and how they annoy me. And I don’t get annoyed that often, so 1. These lists must be extremely annoying, or 2. I have a special annoyance spot in my heart, brain, liver or elsewhere saved just for them.

And with New Year’s rapidly approaching, here come all those top lists for 2013! Oh joy.

To explain why top lists are annoying, I decided to create my own top list, The Top 3.77 Annoying Things About Top Lists. It seemed appropriate.

Since top lists are annoying, I’ve decided to be a little bit more annoying by screaming my list at you in all caps with exclamation points. You’re welcome. Getting to the point, however, the No. 1 annoying thing about top lists is that they are EVERYWHERE online.

I know why they are. They work. They drive traffic to websites. There are even websites devoted to top lists. People see a top list, and they’re curious, they want to know what or who is on it. Let’s say it’s the top 10 most beautiful cities in the world. Some will want to admire the beautiful photos; some will want to see if and where their favorite city is on the list; some will want to view it so they can say the list is garbage.

Top lists work not just in pop culture sites, but also in the B2B marketing space. Our SocialEars HR software tracks the most widely shared articles and blogs among HR influencers, and guess what, many of the most popular articles are top lists. Argghh!

The pervasiveness of top lists wouldn’t be so bad if they all, indeed, lived up to their claims of being top lists.

Unfortunately, frequently top lists are just lists — there’s nothing “top” about them. With these “non-top lists,” it seems like people say, “Hey, why don’t we do a Top 5 or Top 10 List of Whatever; those always generate traffic.” Then the boss says, “Bob, that’s not a bad idea — take an hour today to put one together.” So Bob quickly comes up with however many items they need (perhaps by taking them from another top list he found online), puts them in some kind of order without any statistical basis, and voila, a top list!

And because top lists are everywhere and many of them have no basis for saying they are a top list, it’s not hard to find top lists on the exact same subject with different items, people, etc. in the lists. But, hey, the website traffic!

3. THE FUNDAMENTAL RESEARCH IS LIMITED OR FLAWED!

This is related to point 2, but it deserves its own “special” mention.

As I wrote earlier, it seems like many people just try to come up with the items they need, and then rank them. This is obviously extremely limited research, and perhaps it’s too kind to use the word “research.”

If the methodology is carefully thought out, designed and implemented and appropriate, complete and quality data (remember: garbage in, garbage out) is used, you can create a great list. But the goal is generally great web traffic with the least amount of time resources spent, so many “top lists” fall far short of this ideal.

About methodology: Some top lists don’t disclose the methodology used in creating them. If this is the case, I assume your list is junk. Just so you don’t think my list is junk, here’s how I created it: I thought about top lists and why they annoy me, and then I wrote this. OK, maybe this list is junk! But, hey, the website traffic! 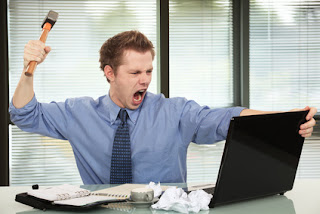 OK, we’re nearing my favorite part of a top list — the end.

My 3.77th top reason why top lists are annoying is that the people generating them are often self-granting themselves the authority to decide what is the top, especially if the list is at least partly subjective.

Let me use myself as an example. I like baseball and movies. Let’s say I decided to create two lists — the top 100 baseball players at this moment and the top 10 movies of the past five years. The baseball list might be credible provided that I used a good methodology, and just didn’t wing it (which would be so much easier — very tempting). The movie list, on the other hand, would be baseless because I’ve seen few of the movies that should be considered.

Still, for both lists, I don’t have much credibility. I’m a nobody in the baseball and film industries. So if I’m going to create the lists and be honest with my readers (if I have any), I better have a great methodology that I clearly explain or acknowledge the limitations/problems with my lists.
But most list creators don’t do either of these things. But, hey, the website traffic!

DO I HAVE ANY HOPE FOR THE FUTURE?

OK, now I’m annoyed. Not surprising, I’ve been writing about why I find top lists annoying, and doing so in the form of a top list. Why did I do this to myself?

Oh well, I suppose it’s not worth it to answer it since I’ve already gotten this far. But there is a better question to be asked. Am I, and other top-list haters out there, cursed to be perpetually annoyed with top lists?

I wish I knew the answer, but my suspicion is, yes. As long as top lists generate more traffic, they will be all over the place, and I think it’s human nature to be attracted to top lists. People love to view them and debate them — think of college football rankings and those top-100 movie rankings that seem to come out every year.

And, frankly, I’m not optimistic about list creators making better lists — the shortcuts are just too tempting. Again, human nature.

But what about the idea that so many top lists have already been created that list creators might run out of topics? Sadly, I don’t think this will happen. If People Magazine can generate new Most Beautiful People lists ever year even though the celebrities in them look the same, then other list creators will find a way.

I guess I’m doomed. (But, hey, the website traffic!)