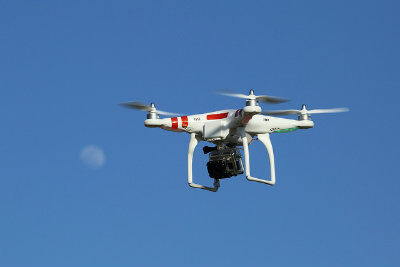 Big data seems to be everywhere, used by every industry, and embraced by every organization. While that’s admittedly a bit of an exaggeration, it’s become clear in the past few years how valuable big data can be no matter where it is used. At the same time the big data trend has grown in popularity, the use of drones has also taken off, in a manner of speaking.

Big data seems to be everywhere, used by every industry, and embraced by every organization. While that’s admittedly a bit of an exaggeration, it’s become clear in the past few years how valuable big data can be no matter where it is used. At the same time the big data trend has grown in popularity, the use of drones has also taken off, in a manner of speaking. These two separate trends may appear on the surface to have very little in common, but in reality, big data and drones are moving in a collision course that could lead to some innovative and unique uses for a large variety of real world problems. In fact, some of those uses are already being put into practice, while others are more theoretical in nature. As promising as the joining of drones to big data is, there are also a number of obstacles that need to be overcome to fully realize that potential. Luckily, experts seem to be well on their way to doing that very thing.

Before detailing the obstacles, it’s important to look at how drones and big data are being used together right now. Perhaps one of the most prevalent uses of big data and drones is in agriculture. Farming has plenty of hurdles to overcome in its own right, particularly in producing enough food to support a rapidly growing population. Employing technology to produce greater crop yields is a top priority, and that’s where drones and big data come in. As many people already know, drones are versatile devices, capable of flying to tough-to-reach places and getting pictures of unique views. One way farmers are utilizing drones is to survey their fields, taking photos and identifying parts that might be sick or ailing from rough weather or lack of water. Drones can also be equipped with monitoring devices able to measure moisture content along with other vital characteristics. From this, farmers can detect when a crop is struggling, leading to immediate action instead of waiting until it’s too late. With better crops, yields will be larger and revenues will improve, helping farmers out during a time when they need it most.

Beyond agriculture, drones and big data can also be used for disasters. A recent example of this practice being put to the test happened in April 2014 after a mudslide in Washington. Workers were able to attach a camera to a drone and fly it around the area, creating 2D and 3D models which could then be used by engineers when it came time for recovery and reconstruction. While it was not needed in this instance, many are already looking at using this same method to help in rescue efforts by spotting survivors that may be overlooked using traditional rescue techniques.

Drones and big data may one day also help in the fight against poachers in Africa. One non-profit organization is combining predictive analytics with drone technology as a way to protect African rhinos. The drones use special infrared sensors that constantly gather data and monitor the sites where poaching will most likely happen. If enough warning signs are collected, rangers are given the alert and can act to stop the illegal activity. This use of technology may aid greatly in preserving the thousands of endangered rhinos that still exist today.

From farming to disaster relief to anti-poaching efforts, it’s clear that drones and big data can accomplish a lot together, but obstacles still remain. Drones may be able to gather data through pictures and videos, but the fact remains that the amount of data is immense. For example, the Air Force Intelligence, Surveillance, and Reconnaissance Agency records more than 1,500 hours of video every single day. A single drone mission may end up generating 70 terabytes of data. All that data needs to be stored and applications need to be developed that are able to correct, process, and properly evaluate such large amounts. Real-time big data analytics and ad-hoc analysis will need to improve as well, and though steps are being made in that direction, there’s still more work to do. Other analytics challenges include a high input rate, the use of many small files, and the problems that come from streaming data.

The potential that accompanies drones and big data is considerable, and eventually these challenges will be solved. Once progress is made, all areas, not just those described in this article, will see improvements and creative innovations. Big data and drones may seem like unlikely allies, but they will truly be a powerful force in solving problems around the world.