Remark: This is the Dnglish version of my previous Dutch blog post.

Remark: This is the Dnglish version of my previous Dutch blog post.

After the provincial and municipal elections of the 14th of October in Belgium, media reported several cases of candidates who had received more preference votes than what normally would have been expected. The additional votes were attributed to a problem with the touch screens of the voting machines. When voters pressed too long when selecting a party, the system would sometimes register a preference vote for the candidate whose name appeared in the same area as where the party was. The figures below illustrates well what the issue is. 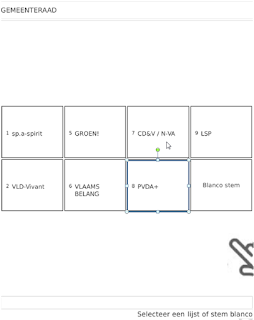 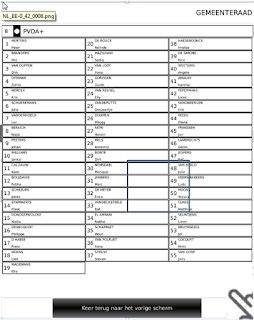 It was reported that in some cases, especially when the voter pushed too hard or too long, the second screen would register a preference vote for the candidate at the same location on the screen as where the party name was (also indicated with a blue rectangle). For simplicity’s sake we will call the position that corresponds with the exact location where the party name was a hotspot.

While some individual cases of remarkbable results were widely reported in the newspapers, a more thorough investigation of the problem was, as far as I know lacking. This effectively means that the magnitude of the effect was unknown.

As a data scientist that’s the kind of question that you would find interesting; you would wonder how big the “Touch Screen Effect” was. That’s exactly what I did in a paper you can download here. In this blog post I’ll try to summarize what I did, focussing on the Data Science aspects.

The first problem is to get the data. While a lot of (news-)websites offered web applications to retrieve the results of the elections in a meaningful way, none of them allowed me to download the complete set of results, i.e. for each candidate, on each list (or party), in every municipality of the Flemish part of Belgium, the number of preference votes was needed.

So I wrote a Python script to scrape the data from one of those websites. I used the BeautifulSoup and Selenium packages for that. If the hypothesis of a “Touch Screen Effect” is true we would expect a higher number of votes on hotspots than on the other positions. So the second problem becomes: “What is the expected number of votes for a given candidate on a given position, on a given list (or party) in a given municipality?”

For reasons that are detailed in the paper we chose to model the natural logarithm of the share of vote of a candidate (relative to his or her party in his or her municipality) with a multilevel regression model based on a polynomial of the third degree of the position of the candidate on the list. The polynomial is needed to capture the curvilinear nature of the data. Typically the candidates on top of a list, and the candidates at the bottom of the list receive more votes than those in between. The computations were done in R, using the LME4 package. Those who are interested can find the formulas in the original paper. The figure below illustrates this curvilinear nature for a random selection of 9 party-municipality combinations. The red line comes from a local regression model, the green line is the multilevel model that was used in the final analysis. 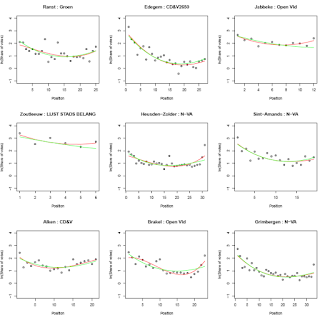 So far, so good. The third problem is to decide on what constitutes an exceptional share of vote. Here we use the standardized residuals, as calculated by the LMERConvenienceFunctions in R (this is because in mixed models the calculation of standardized residuals is not that straightforward). Values above 2 are considered as being outliers.

With these three problems solved we can show the results for the main parties in the city of Antwerp (see below). The black points are the share of votes of the candidates (expressed as percentages) in function of the position of the candidate. The red points are those that are considered to be outliers, using the criterion descussed above. The green line is is the multilevel regression line. Hotspots are indicated by two blue vertical lines. Notice that in this figure the first 4 positions were omitted (for a justification, see the original paper). 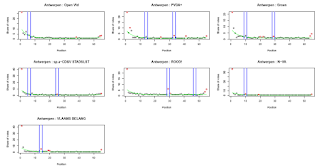 In the figure above we see that all parties, except Open Vld, have an outlier that happens to be on a hotspot. There are a few parties that have more than one hotspot, while only one of them is actually an outlier. And finally, there are some outliers that are not on a hotspot. The latter observation should not come as a surprise. Exceptional election results can be attributed to lots of things, such as running a good campaign, being famous, and so on. In other words, the fourth problem is that we need to take into account that outliers could also just accidentally be on a hotspot.

The approach I’m using is based on the calculation of some simple conditional probabilities. The probability for a hotspot in Antwerp to be an outlier (i.e. have substantially more votes than expected based on the position on the list) is about 55%. The probability for a normal (non-hotspot) position to have an outlier is 7%. The ratio between the two is 7.5. This means that the probability to have an exceptionally high share of votes (i.e. being an outlier) is 7.5 times higher for a hotspot than it is for a normal position.

It must be said that not all municipalities have the same spectacular effects as in Antwerp. On the other hand we should also stress that estimates are probably conservative. One of the reasons that this is the case is that the regression model is generally good, except for the first and last position. This effectively means that there are quite a lot of outliers on those two positions, while those positions are not relevant from the perspective of the Touch Screen issue. We can calculate less conservative estimates by disregarding the first two positions and the last two positions. Also, my approach doesn’t work well for smaller municipalities because the lower number of observations. And hence we limit ourselves to the 12 most important Flemish cities where electronic voting was used. In those cities the overall, conservative, estimate is almost 2, while the less conservative estimate is 4.5.

I repeat the interpretation here: In the most important Flemish cities that used electronic voting, the probability to have a (much) higher votershare than expected on a hotspot is almost twice as high as it is for a normal position. If we use the less conservative estimate it becomes 4.5.

Some parties are more affected than others. The right-wing Vlaams Belang party seems to be more affected than others. If we again limit the analysis to the 12 most important Flemish cities that used electronic voting we see that the probability that a hotspot is an outlier is 40%. This is 10 times higher than it is for other positions for this party. If we use the less conservative estimate the ratio becomes more than 80.

The heatmap below illustrates the situation for Vlaams Belang in the main Flemish cities well. The columns are the twelve major cities in Flanders that used electronic voting. The rows are the positions on the candidates-list. The blocks with a blue border are the hotspots. Notice that the total number of candidates on the list can vary over the cities. The colouring of the heatmap is a function of the squared residuals of the multilevel-model. We thus take a less binary approach as we did above when we classified all cases as either being outliers or not. The dark areas (red and orange) are the positions where the voter share was close to the expectation. Lighter colours (yellow and white) indicate positions that deviated from the expectation (higher or lower).

The first thing we notice in the heatmap below is that the top position and the last position are generally not well estimated by the regression model. That’s not ideal, but it is less relevant from a “Touch Screen Effect” point of view (none of the top or bottom positions are on a hotspot). The important thing here is to notice that the remaining area between the top and the last position generally is dark (red or orange). There are some brighter spots, though. The brightest spots happen to be in the blue rectangles, i.e. hotspots, illustrating the effect of the position of the partyname (on the previous screen) on the preference votes themselves. It appears that besides Turnhout, the only cities that were not affected are those where the party name was split over two candidate columns (and hence two hotspots for Genk, Aalst en Roeselare). 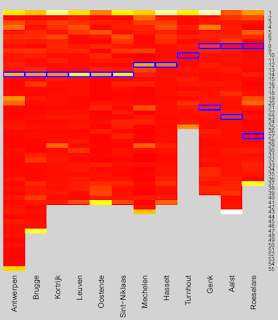 Remark: for a figure of better quality see the original paper

Conclusions:
Based on these findings I’m confident that the “Touch Screen Effect” as reported by the newspapers right after the muncipal election in Flanders, Belgium in 2012, were not only anecdotal, but had a clear effect in Flanders’s largest cities. The study remains inconclusive with regard to smaller municpalities. On aggregate there remains a noticeable effect over all municipalities were electronic voting was used. Some cities, such as Antwerp, and some parties, such as Vlaams Belang, seem to be more strongly affected than others.

From a data science perspective it is interesting to notice that in this reseach I had to combine 3 skills:

It is not by accident that these are also the three elements in The Data Science Venn Diagram of Drew Conway: 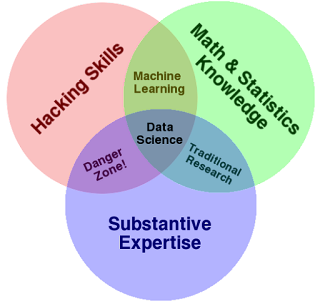