It Just Got Cloud In Here… 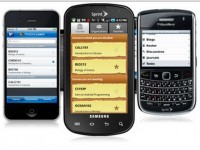 Blackboard has been a fixture in a majority of higher level institutions for a couple decades. Blackboard has now announced that they have released a new Software as a Service play entitled Learn. In addition to Learn now being available under the popular SaaS model, Learn remains available for educational institutions who would rather use a managed hosted solution or an unmanaged onsite version of Learn to suit the educational institutions needs of its students. Learn’s SaaS version was announced earlier this summer at a BBworld conference.

SVP of Product Management Mark Strassman commented on the new release saying, “Institutions do have different needs and many prefer the unique advantages of self-hosting or managed hosting. So the fact that Blackboard is now able to support those modes of delivery alongside SaaS gives schools unprecedented amount of choice as they decide how they want to work with us on their hosting environments. And we are the only company that can make this offering.”

Blackboard’s website highlights the usual advantages of the SaaS delivery method. The biggest selling points for SaaS in the educational sector is the fact that end users will see no downtime as updates and what not are applied to the underlying systems. Universities will no longer need to advise users that they can not turn in homework at an early morning hour, which has been a complaint of students who enjoy working on coursework at an odd hour.

Strassman is further quoted as saying that Learn “scales elastically to support heavy usage and peak periods.” Strassman goes on to say, “We can fix bugs and security issues almost immediately, and we can deploy new features rapidly instead of once or twice a year.”

The introduction of the cloud version of Learn also bundles a Lynda.com membership. Lynda.com will provide Blackboard training videos as well as resources that are beneficial for both students and instructors.