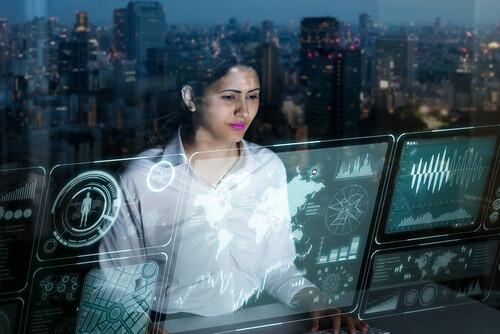 Not long ago, big data was one of the most talked about tech trends, as was artificial intelligence (AI). But, in case people need a reminder of how fast technology evolves, they only need to consider something newer ? big data AI. It combines elements of both technologies. AI allows computers to perform cognitive functions, much like the human brain. It can also make adjustments based on what the information shows. In contrast, big data looks for insights in gigantic quantities of data and may spotlight certain trends, but it doesn’t act on them. So, big data AI can both compile information and respond to it. In some cases, companies working with big data AI build tools or platforms that require AI and big data capabilities to work. Each of the technologies plays a defining role in achieving the result.

A company called Near has technology that uses aspects of big data and AI. It recently closed a funding round where the company got $100 million to develop technology that gathers mobility-based behavioral data from more than 1.6 billion devices around the world. For example, the enterprise has tools that tell users how often people from a certain demographic visit stores and when, or how far they traveled to get there. AI comes into play because the enterprise collects data from third-party sources and uses machine learning algorithms developed in-house to clean the information and cut out noise, making it more usable.

Companies work in the risk assessment realm when representatives decide whether to offer insurance or loans to clients. They need to determine whether extending those things to a client could be a bad idea for the brand that’s offering them. For example, if a company seems likely to file an excessive number of insurance claims, it could be a high risk for an insurance company and cause the company to pay higher premiums to compensate. Or, if it appears that a client is unable or unwilling to pay back a loan, they’ll likely have trouble securing one that’s as generous as they want. Some big data AI companies assist underwriters with making risk assessment decisions. The proprietary technologies they use cuts down the time required to come to conclusions and allow the users to view more data when evaluating a client. Cytora is a company that operates in the European and Australian markets for now but plans to expand. It has an AI data engine that gathers information from multiple sources, like government data sets and news articles. Then, it intelligently assigns a risk grade from A to F, with an F-graded business most likely to have the highest claims costs. Similarly, there’s a business called Scienaptic that combines AI and big data while looking at other kinds of risks, too. For example, besides assisting with commercial underwriting needs, it works for fraud prevention and financial forecasting. The company recently received agreements from a company in Singapore that will invest $7 million to help build its technology.

Company leaders have to evaluate several things before they prepare to go public through an initial public offering (IPO). Some of the questions typically on the table relate to the appropriateness of the current management team, the trustworthiness of the board members and whether the company has a history of profitability. In 2014, Cloudera and Hortonworks had much-hyped IPOs. But, in January 2019, Hortonworks closed an all-stock, $5.2 billion merger with Cloudera. Both of those companies use Hadoop to help clients manage and assess their data, and they were constant competitors. The merger should allow the companies to blend their talents and business models and figure out how to stay profitable in this age of big data AI. Some analysts wonder if the end of big data is near. But, it seems like it’s merely evolving to incorporate more AI. As such, more mergers between big data companies may happen, and a shift could occur where those companies bring AI experts on board to help them prepare for the future. Even if mergers don’t happen, big data companies may start investigating how they could revamp their technologies to feature more AI elements. One of the main advantages of doing that is that AI could help people make sense of big data findings faster than before since it has decision-making abilities. Then the companies using those platforms could become more successful at applying the insights provided to them by specialized platforms. Big data as a standalone technology is not going away, but people should expect more instances where it gets better with AI.

The Abundant and Diverse Potential of Big Data AI

The examples above illustrate how there are compelling use cases for big data AI in the business world. But, people need to realize that other applications exist, too. One fascinating example of what’s possible involved the most recent Wimbledon tennis tournament. Wimbledon organizers invite hundreds of thousands of people to attend the event, plus stream it live to millions more around the world across nearly two weeks. Plus, the high-profile event demands constant security. Data helps the event succeed without major problems. IBM is the official technology partner of Wimbledon, and it has collected 62.8 million data points since 1990. The information gathered ranges from photographs of the matches to the positions of players on the court. Then, IBM uses AI in inventive ways, too. It created a chatbot that allows fans to find out more about scheduled matches or their favorite players. But, on the back end, there’s substantially more happening with help from AI. IBM applies AI to real-time video footage, tasking it with analyzing the expressions made by tennis stars or the noise level of the cheers from fans. Wimbledon representatives then depend on AI’s findings to help them figure out the best highlights from the matches on a given day. There are 10 courts on the Wimbledon grounds, so mining through all the video data without AI would be too time-consuming. After all, people demand updates as quickly as possible and wouldn’t want recorded footage to reach them days later. This is just one example of how big data AI could facilitate progress in unexpected ways. As it becomes even more widely used, people can expect to see more surprising and relevant uses.

It’s too early to say for sure what the rise of big data AI will mean for the companies that decide to experiment with it. But, one likely possibility is that the time required to benefit from big data will shorten. That’s because instead of platforms merely looking through vast quantities of data and finding patterns, AI will help ensure that the evaluated data is the most applicable to a user’s needs. So, people may look through less data for analysis, but only because AI found the most appropriate information first. Big data is already much faster than humans working without it, but the efficiency may increase even more.