With an endless wave of new companies pushing innovative new technologies, the BI market has been one of the most dynamic in the software industry during the past 20 years.

…[T]he plethora of advertisements about BI capabilities that appear on television (e.g., IBM’s Smarter Planet campaign) and major consumer magazines (e.g. SAP and SAS Institute ads) reinforce the maturity of BI as a mainstream market. BI is now front and center on the radar screen of most CIOs, if not CEOs, who want to better leverage information to make smarter decisions and gain a lasting competitive advantage. 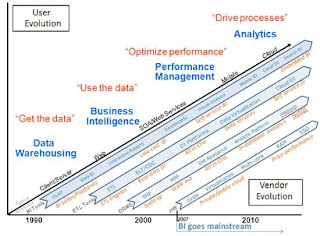 To prove this point, Wayne created a great timeline of the Business Intelligence industry mapping the changes in Users against those of the Vendors.

Wayne maps out the following key time periods in the BI market’s evolution:

What’s left in the future? Wayne talks about continued changes:

At this point, some might wonder if there is much headroom left in the BI market. The last 20 years have witnessed a dizzying array of technology innovations, products, and methodologies. It can’t continue at this pace, right? Yes and no. The BI market has surprised us in the past. Even in recent years as the BI market consolidated–with big software vendors acquiring nimble innovators–we’ve seen a tremendous explosion of innovation. BI entrepreneurs see a host of opportunities, from better self-service BI tools that are more visual and intuitive to use to mobile and cloud-based BI offerings that are faster, better, and cheaper than current offerings. Search vendors are making a play for BI as well as platform vendors that promise data center scalability and availability for increasingly mission-critical BI loads. And we still need better tools and approaches for querying and analyzing unstructured content (e.g., documents, email, clickstream data, Web pages) and deliver data faster as our businesses increasingly compete on velocity and as our data volumes become too large to fit inside shrinking batch windows.

Sounds like lots of fun is still to come.